Beech Grove, IN (February 28, 2019) IBG — One hundred years ago, on February. 23, 1919, Viola Arnold was born. It was a different age. The president was Woodrow Wilson. Congress had just passed an act to establish the Grand Canyon National Park in Arizona. Women could now vote. A gallon of gas was $0.25 a gallon and a dozen eggs were $0.55. Future baseball player, Jackie Robinson was born, as was Nat King Cole. A “dingbat” was a stupid person, the Adventures of Ruth played in the movie theaters and the names Mary, Helen and Dorothy were just a few of the popular baby names for the time. 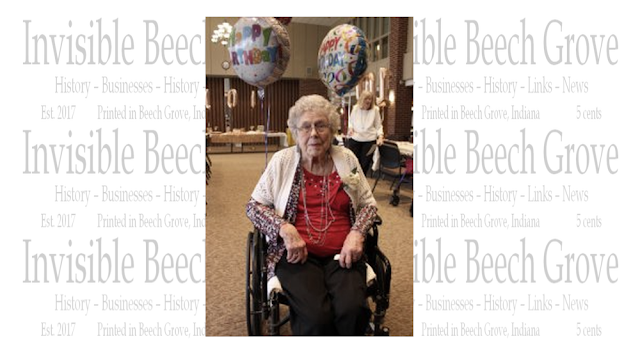 Saturday, Feb. 23, saw the Altenheim Senior Living facility’s reception hall decked out in long tables, balloons, chocolates and cakes, celebrating longtime Franklin Township’s resident guest of honor, Viola Arnold. The birthday girl marveled at the attention as longtime friends, family and church members steadily made their entrance to congratulate her upon reaching this milestone. “To me, it just feels like another day,” she stated, with a smile upon her face. “It’s no big thing, but it is, I guess. So far, I’ve been able to remember things fairly well, but I’ve noticed I’ve been getting a little bit less sharp.”

Remembering a close-knit community Back in the day, Franklin Township and Wanamaker was a close-knit community. Family members remained close. Everyone knew everybody. There were no strangers. “My maiden name was Rode. My great-grandparents emigrated from Germany. They had a business downtown … a livery stable where they boarded horses,” Viola recollected. “They bought this piece of ground out in Franklin Township and built a log cabin (where the present-day Hanna Haunted Acres sits). This farm finally came down to my mother and father. That’s where we lived.” In time, her father passed and her mother had a stroke. Her four brothers and one sister took care of their mother at the farm until her last days. 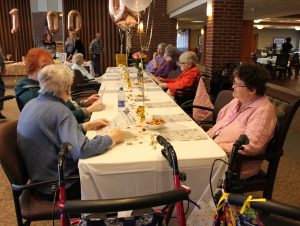 Viola was no longer a child, having worked at a couple of insurance agencies until landing a job at a factory on the Southside that produced tubes for jet engines — Tube Processing Corp.

“I retired to care for my mom,” she said. “We sold the farm when my mother died. There were six of us … if there had only been one or two, we might have kept it.”

Viola and her brothers moved into homes close, along Hanna Street. Her sister moved to Edgewood Avenue.

Time marched on. Viola has lived in Altenheim since January 2017. Prior to that, she resided at other assisted living facilities, finally deciding she needed more long-term help, resulting in the move to Altenheim. Her son, John Arnold, reflected upon his parent’s history. “My parents grew up in church together. They had a few dates before World War II and then dad went to war. After he came back, they got married around 1947.” John smiled as his eyes looked back on precious memories. “I was going through mom’s stuff and found old letters between them written back and forth during the war.” Those are certainly keepers!

John’s dad and Viola’s husband, Harold Arnold, died in 1988. As guests milled about the room, ate cake, and reflected upon numerous photos of another time and place, Viola was busy entertaining her guests. She was busy! Driven by faith “I think my faith drives me. I was born and baptized as a baby. I’ve belonged to the St. John’s Lutheran Church on Southeastern Avenue ever since.” It’s faith in our salvation and faith that Jesus will take us to our final home! Her son, John, stated, “She’s made me a better person. In the last few years even! More calmer.” He looked back. “It was sad when we had to sell her house. However, she has taught me a lot more patience in things.” Viola agreed. “He never had patience before, but he does now! He lives one day at a time, just like I do.”

And … the secret of reaching the age of 100? “I don’t really have a secret. God has been good to me. And I think there’s a reason He’s keeping me here on this earth,” she offered. “And … I eat a lot of chocolate. I’d like to have a glass of wine, but no one’s offered it to me.”