Beech Grove, IN (June 29, 2019) — Progress is being made in repairs to Beech Grove High School after it was damaged by a June 15 tornado.

"The Science Academy and its three classrooms are a total loss," said Kaiser. "The Hornet Enrichment Academy (the former Media Center) is a total loss. Classroom and lab contents are currently being evaluated to determine what can be salvaged and what contents will be replaced." 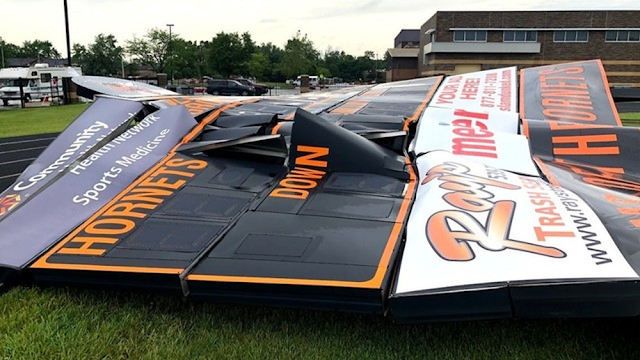 A final damage estimate won't be available until school officials and insurance adjusters finish their work, but insurance is expected to cover most repairs costs, according the school district spokesperson Melody Stevens.


The F1 tornado with wind speeds estimated by the National Weather Service at 100 miles-per-hour carved a damage path 200 yards wide over the school grounds, east of South Emerson Avenue and north of I 465.

Besides the classrooms and academy, there was damage to the football field, baseball field and tennis courts.

Inside athlertic facilities were not damaged, but teams were kept off campus in the days right after the tornado as a safety precaution.

"The high school campus remains closed to the public as debris removal and construction continue," said Kaiser. "The campus is only accessible to authorized workers and staff and to students who are part of an authorized practice camp."

School reopens for the fall semester July 31 and not all repairs will be done by then, according to Stevens. But she says students who would normally be in areas that were damaged will be moved elsewhere on campus.