Fryar also holds offers from the likes of Indiana (where his father played), Purdue and Cincinnati. 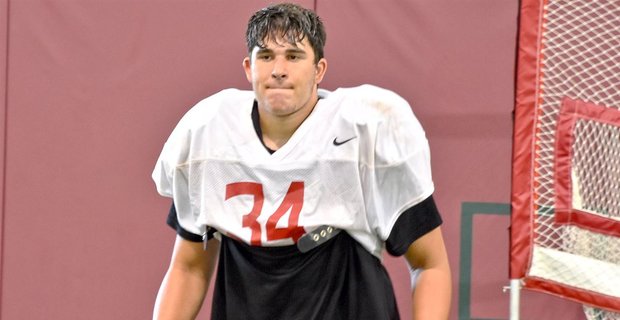 Fryar was accepted to be at Purdue this past Thursday for its opener and is considering trips to Iowa, Indiana and Toledo throughout the month of September.

Beech Grove, Indiana (August 10, 2018) — An Ohio County sheriff’s deputy on Sunday arrested a convicted sex offender from Indiana who was reportedly taking photos of juveniles participating in a swim meet for athletes up to 14 years old at the Spire Institute athletic complex. 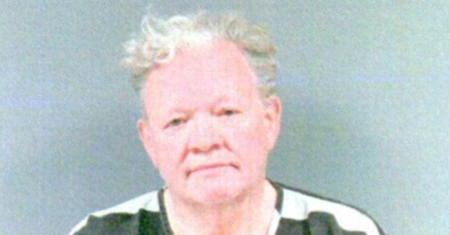 
One of the swim meet officials contacted county authorities after Renick made confusing statements about his reason for being at the meet. Officials said Renick was wearing a photographer’s vest and carried professional cameras. They’d previously seen him at swim meets at Cleveland State University, Columbus and Canton, as well as Indiana University-Perdue University in Indianapolis, Indiana.

When approached by the deputy, Renick reportedly gave the deputy a fake name and date of birth. The county dispatcher checking that information was unable to return any police records, the report states.

Renick “appeared very nervous, his hands began to shake and he fumbled with removing SD cards from his camera and switching it with another,” the report states. Renick’s reasons for attending the event changed multiple times while speaking with the deputy, he noted.

“I told James that I didn’t believe a word he was saying,” the deputy wrote. “James said he would just leave the facility.”

Renick, a former TV news reporter, pleaded guilty in 1996 to molesting two boys under the age of 10 in Pennsylvania, and served six years in a Pennsylvania state prison.

According to The (Allentown) Morning Call, authorities conducting a June 1995 search of Renick’s Pennsylvania home found “thousands of photographs of young boys naked and in bathing suits” as well as other sexually explicit material. 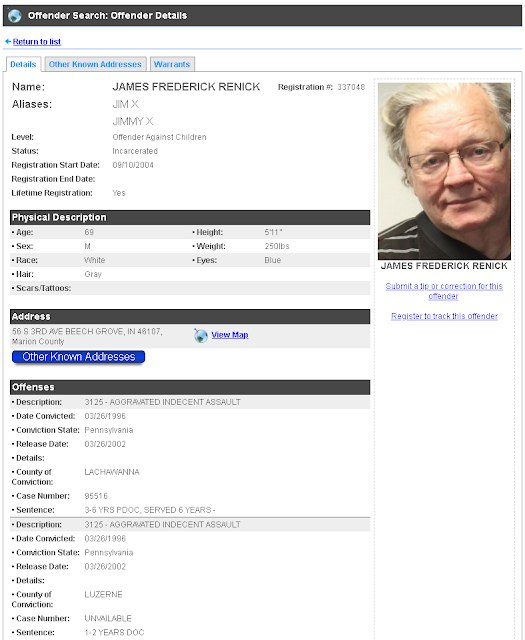 The Ashtabula County deputy on Sunday searched three of Renick’s camera memory cards and while they had many images of children at sporting events, none of the images were sexually explicit or involved nudity, the report states.

In 2015, 13 years after he was released from prison, Renick was caught with camera equipment outside his Indiana home and sentenced to an additional two years of probation for breaking a condition of his release, according to The (Scranton) Times-Tribune.

Renick remains in the Ashtabula County jail. He pleaded not guilty Monday in Western County Court, where his bond was set at $25,000 or 10 percent cash or surety, with the condition that he have no contact with children or photography equipment. A court hearing date is set for Aug. 21 in that court.

Court records do not list an attorney for Renick.

Search for sex offenders in your area: Indiana Sex and Violent Offender Registry

Beech Grove, Indiana (August 9, 2018) — Adults in Indiana are more likely to die from a drug overdose than a car accident. And for many Hoosiers, substance abuse begins in adolescence.

That’s what spurred the Richard M. Fairbanks Foundation, an Indianapolis philanthropy, to create an ambitious grant program to help schools roll out new substance use prevention strategies. The foundation announced Tuesday $7.5 million in grants to 24 Marion County schools and districts. 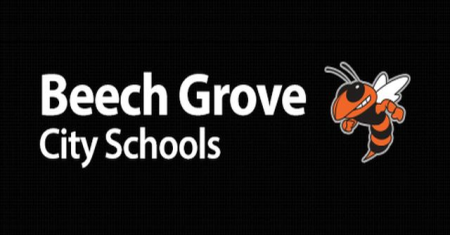 Because substance abuse often begins early, schools across Indiana have an opportunity to reduce drug, alcohol, and tobacco use. But just 11 percent of Marion County schools reported using a proven prevention curriculum in a survey last year. With the grants, the foundation hopes to increase the number of schools using evidence-based substance abuse prevention programs, said Claire Fiddian-Green, president and CEO of the foundation.

“It feels like a really urgent need to help equip students with information so they can make better decisions and not fall into the trap of addiction,” Fiddian-Green said. “Schools can and should play a really powerful role.”

The foundation has committed more than $10.2 million since January at Marion County schools, including the $7.5 million in implementation grants announced Tuesday, $860,000 in planning grants, and about $1.8 million in ongoing technical assistance and evaluation.

The grants are expected to help schools reach over 71,000 children and teenagers — about 44 percent of all students in the county — over the next two school years.

The largest grant will go to Indianapolis Public Schools, which was awarded $1.7 million. The grant will allow the district to use proven resources to help students avoid substance use, Superintendent Lewis Ferebee said in a statement.

“Opioid use has reached a crisis level in central Indiana and across the state,” he said.

School-based drug abuse prevention classes have a spotty track record. The best known substance abuse prevention program is D.A.R.E., Drug Abuse Resistance Education. That program has been found to be completely ineffective. But there are other approaches that have been shown to work.

Fairbanks partnered with the Indiana Prevention Resource Center to develop a list of programs that research shows lead to short- and long-term reductions in drug, alcohol, and tobacco use, Fiddian-Green said. In order to receive the grants, schools must choose from those evidence-based programs.

Indianapolis Public Schools will use Second Step in elementary and middle schools. The program is not specific to substance abuse — instead, it is a broad social-emotional learning curriculum designed to promote social-emotional competence and self-regulation.

As opioid use has roiled Indiana, Fairbanks has supported other efforts to address the immediate crisis, such grants focused on expanding access to treatment, Fiddian-Green said. But the foundation is also looking for longer-term strategies to reduce abuse in the future.

“It’s opioids today, it could be something else tomorrow,” she said. “Prevention with children and teens seems like the next place to go.”