Topeka, Kansas (November 18, 2019) IBG — 13 Investigates uncovered a disturbing discovery. A Kansas man with no medical license is doing business in Indiana and allowing his contractors to perform autopsies without credentials. It's all coming to light, as another state works to shut down his makeshift morgue. 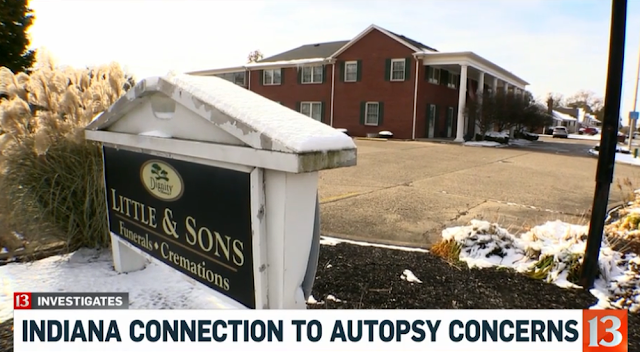 For the first time, an Indiana family is sharing their shocking story about a case that's more than a little unsettling.

Inside a makeshift morgue in Topeka, Kansas, disturbing images appear. Plastic containers hold what appear to be human organs and tissue. "This is the autopsy suite," Shawn Parcells announced in a video tour of his facilities. The converted house is where he does what he calls "gross dissections."

For nearly a decade he's been performing autopsies without a license or proper medical credentials. A Kansas court has finally ordered him to stop and is now shutting down his lab. But that order only applies to the state of Kansas, and for some Indiana residents it's too late.

In a portion of the video, Parcells boasts of working with one of the top research schools in the Hoosier state. "This one is a case we did for Indiana University, a brain case," he said.

According to the Indiana University School of Medicine, the school did contract with Parcells and his company as part of a national Alzheimer’s Disease study. Assistant Director at IU School of Medicine, Kati Duffey, told 13 Investigates it was for a limited number of instances, and that the school has been in touch with authorities.

In a statement Duffey wrote:

“Due to confidentiality, we cannot discuss individuals or organ donors who participate in research. We are aware of the legal proceedings taking place in Kansas. We take seriously the responsibility donors and their families place in us.”

And it’s not just tissue samples from Indiana causing concerns here in Indiana. 13 Investigates confirmed Parcells company has also conducted autopsies in Indiana. "As far as Indianapolis is concerned, I think we only had two cases. ...," Parcells said.

Now for the first time, the family of one of those cases is speaking publicly. "It was shocking at first. What in the world did this guy just do to my family?" Nicole Cash said. Cash is referring to the autopsy performed on her grandmother, Dollie Lee Kinder.

Cash is angry after learning the man whose company her family hired to do the autopsy had no credentials to handle her grandmother's remains. "He is not who he says he is," she said.


Kinder suffered from dementia but her family said her death came unexpectedly. National Autopsy Services of Topeka, Kansas touted "unbiased experts" in "forensic and legal medicine." So Kinder's family signed a contract and paid $3,600 to get the autopsy done within three days.

Little & Sons Funeral Home in Beech Grove confirmed to 13 Investigates that the autopsy was performed at one of its Indianapolis facilities.

"I'm very angry because I feel like this man should have been stopped a long time ago," Cash said referring to several stories that have been done across the country regarding Parcells. CNN first uncovered Parcells was lacking credentials when he acted as a spokesman, detailing the injuries suffered by police shooting victim, Michael Brown.

In Indiana, you must be a board certified pathologist to perform an autopsy. Court records in Kansas show Parcells has never been a licensed doctor, pathologist, medical examiner or physician assistant.

In a statement, the spokeswoman said:

"We sympathize with the (Kinder) family. Shawn Parcells is not and has never been employed by Little & Sons or any Dignity Memorial location."

Autopsies, if requested by the family, are arranged individually between the family and a pathologist and are performed under a separate contract, entirely independent of the funeral home." Now new questions are being raised about Parcells and his business practices. Cash caught up with him outside of a Kansas courthouse.

What do you have to say right now?" "An autopsy was done, there was no scam," Parcells responded. But Parcells later told 13 Investigates, there was no autopsy of Kinder.

He claimed he hired a third party to remove only tissue and portions of Kinder's brain, but admitted the person who did the work was not a licensed doctor nor pathologist. "No, he's a surgical technician," Parcells said.

Parcells said he's working to get the Kinder family answers and never intended for anyone to be hurt. "He should be criminally charged and put into prison,"Cash said. "You don't think someone so cold hearted could do something like this to grieving families?"

The director of the Indiana Coroner's Training Board told 13 Investigates it is against the law for anyone other than a board certified pathologist to do an autopsy in Indiana.

Cash said she has reported Parcells to the Attorney General's Office. No word tonight on what action is being taken. Under the Kansas court order, Parcells must turn over all of the tissue from his lab to the Kansas Department of Health.

Meanwhile Cash and her family want a full review of Kidner's case.