Indianapolis, IN. (September 28, 2018) IBG — Longtime WFYI President and CEO Lloyd Wright, a native of Beech Grove is preparing to retire after 30 years at the helm of central Indiana’s public broadcasting stations. He announced his decision at today’s board of directors meeting and will remain in his position while working with the board in its search for his successor. 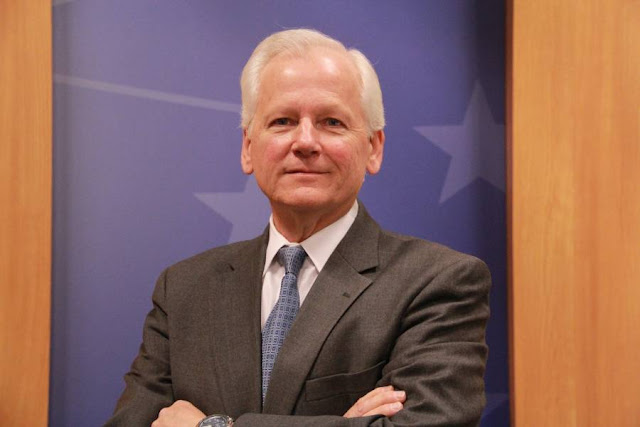 
“I knew this day would eventually come,” Wright said. “I’ve been unbelievably fortunate to represent WFYI and public media all these years, and there’s no doubt I’ll miss it, but I’m looking forward to the next chapter of life while still being part of the WFYI family.”

Wright, 65, is the longest-serving station manager in Indianapolis. He joined WFYI in 1988 as director of Program Production before being appointed president and CEO the following year. Among his many achievements are:
• Transitioning the stations into the digital age, developing WFYI 1, WFYI 2 (PBS KIDS) and WFYI 3 (Create) for television; 90.1 FM HD1 (NPR) and 90.2 FM HD2 – The Point for radio and online; and wfyi.org
• Adjusting the 90.1 FM format to meet audience demand for NPR news content; the station now boasts the two largest news/talk radio programs in the country with “Morning Edition” and “All Things Considered”
• Growing the station’s operational budget by 450 percent and membership to 25,000
• Implementing strategies to tell important Indiana stories through programs like “Across Indiana,” “Communities Building Community with Judy O’Bannon,” “Indiana Week In Review,” “Attucks:  The School That Opened a City” and “Eva”
• Leading station staff efforts that have earned more than 120 regional Emmys and four “Station of Excellence” awards, something no other area station has done
• Increasing WFYI’s local journalism efforts to fill a void in the market
• Relocating the station in 2008 to its current modern facility at 1630 N. Meridian St.
• Developing dozens of community partnerships
• Leading three capital campaigns that raised more than $34 million

“Lloyd Wright has expertly led WFYI through incredible growth and extraordinary changes over the last three decades,” WFYI Board Chairman Michael Heaton said. “He’s expanded our audience, grown our membership and has always shown remarkable integrity and character. We wish him the best in his well-deserved retirement, and we know he’ll continue to be one of WFYI’s greatest ambassadors for years to come.”

Wright was inducted into the Indiana Broadcasters Association Pioneers Hall of Fame in 2013 and has received numerous other local and national awards. He is well respected by his peers around the country having served four three-year terms on the PBS Board of Directors and as a Chair Emeritus of the American Public Television (APT) Board of Directors.

"Throughout his extraordinary career with WFYI, Lloyd Wright has demonstrated a deep commitment to the mission of public media,” PBS President and CEO Paula Kerger said. “We at PBS are especially appreciative of Lloyd’s leadership and his many contributions to the public broadcasting system, including his service on the PBS Board of Directors. Lloyd is an inspiration to all of us fortunate to call him colleague and friend."

Wright is a Beech Grove native who, upon graduation from Indiana University, began his professional career as director of instructional broadcasting with the Indiana Department of Education. That eventually led to positions with the IU News Bureau and then WTTW-TV in Chicago before he joined WFYI in May 1988.

Among his many awards and recognitions are two Sagamore of the Wabash honors, the highest award given by the governor to recognize distinguished service to the state of Indiana.

“Lloyd has long been a community pillar and an exceptional leader with a passion for the educational aspect of public broadcasting,” Indiana Governor Eric Holcomb said. “He has done so much to help prepare children for school and adults alike for lifelong learning.  He is simply one of Indiana’s finest, ever.”

The search is now on to find Wright’s successor. Heaton said the board will conduct a national search, which could take several months, and Wright will stay on to ensure a smooth transition of duties.

In Wright’s honor, WFYI today announced the creation of the Lloyd Wright Legacy Fund, which will support future unique Indiana storytelling programming at the station. The new fund will be tied to the station’s upcoming 50th anniversary in October 2020.

“I’m honored and humbled to have a worthwhile cause live on in my name,” Wright said. “I have so many people to thank for their support of me and WFYI over these many years.  I especially appreciate the dedication of our talented, award-winning staff and our dedicated volunteers who helped to found the station in 1970."

“I believe public media is a crucial part of any community, and to be a part of building it in my hometown over all these years is extremely gratifying, and I’m grateful to have had the opportunity.”