Beech Grove, IN (November 7, 2019) IBG — There was the broken home. The violence, the neglect, the desertion: born in Beech Grove, Indiana, the young Terence Steven McQueen shuffled between his native Indiana and Missouri, and eventually California, passing from one home to another.

The child knew mostly misery. But he had been given something.

Somewhere, someone decided that McQueen needed to be baptized Catholic just as his mother had been before him. In the biographies this fact is mentioned in passing, understandably perhaps, as it appeared to have made little difference to the boy, the adolescent, and, later, the man. But the gift did matter. 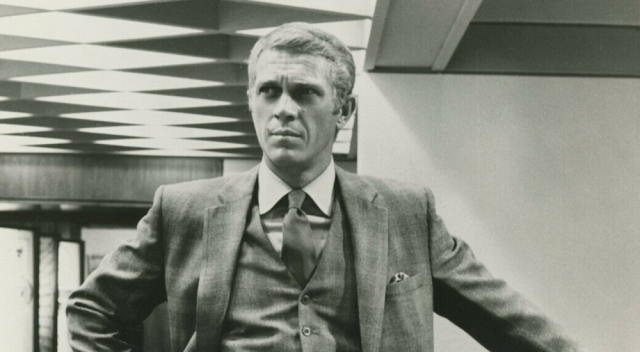 What the Hollywood star’s biographers also sidestep is his ending. In a strange way McQueen’s final earthly moments make sense of all the rest.

In that final “performance,” McQueen played a role much older than any he had acted on the Silver Screen, and, for once, it really was a matter of life and death.

But we’ll come to that.

What had passed for childhood soon he turned into a troubled youth. With no home, McQueen ended up on the streets, until a court sent him to one that was there to reform boys like him. The Boys Republic was to be the start of the end of childhood; for the young McQueen it was also the beginning of a mistrust of institutions — the image of authority had long since been fractured for this child from a broken home. It appeared to many that the only thing McQueen had been given in life was resentment.

From one institution to another he moved. Before living the life of a drifter and a vagrant. An angry young man can always find a home, however, in any military, and the United States Marine Corps was ready to receive a world-weary 17-year-old McQueen. It was 1947 and he would serve three years. Too early for Korea, he saw no combat, yet his time in the Marines was suspected of later killing him. Over 30 years on, he was diagnosed with a disease that was believed to have its origin through in the then routine removal of asbestos during a military chore.

He didn’t know it then, but the clock had begun ticking for Steve McQueen, curiously just as his luck was about to change.

From 1952 onwards, thanks to the G.I. Bill, McQueen set out to become an actor. For many years his desire for his acting talent to be recognized was more aspirational than real. Finally, however, six years later things began to shift. From 1958 to 1968, at rapid speed, McQueen ascended from bit-part player to television star, from supporting actor to lead, from movie star to superstar.

By the late 1960s, all Hollywood bowed before him; McQueen had become one of its new kings. By then, this King of Cool had touched the zeitgeist, or it had touched him, and thereafter bestowed upon him a glittering kingdom of tinsel. That was only one side of the story though.

There was another, darker side to this Hollywood luminary. This was not so surprising, given that there was very little light and much darkness at the heart of the world he inhabited. Perhaps inevitably, that darkness found its way into a man unable to resist its blandishments and allures. The public ascent had seemed rapid and assured; the private descent was to be equally so.

By the mid-1970's, there was a trail of broken marriages and emotional debris, Charles Manson-inspired death threats and drug busts, false starts professionally, and a reputation he didn’t need in Hollywood. That movie town no longer seemed to need this increasingly temperamental star. The movie business decided to move on. By then, McQueen was an actor in his 40's, with his looks fading as, inevitably, younger, hungrier actors jostled for his much-coveted crown. As the lights over Hollywood began to dim, it seemed that a king was being sent into exile.

His final cinematic outing was Tom Horn (1980). It was about a frontiersman finally cornered by modernity and the relentless march of time, facing death by hanging. As it happened, when Tom Horn was being made, having by then physically experienced the first signs of what was coming next, namely cancer, its star was equally cornered. Thereafter, McQueen’s life was hanging by an ever more slender thread.

Unexpectedly, as the end came into sight McQueen raised his gaze. When at the height of his former pomp, he had been asked by an interviewer what he believed in, the actor had declared: himself. Now, on learning that that same frail self was falling apart, another belief stepped in. For many years, McQueen had known a man called Sammy Mason. This man was as different as could be from the movie star and his circle. He was a family man, good at his profession and liked by his fellow workers, and, more important still, a Christian. One day the man who wore the tarnished crown of movie-stardom and who had ruled supreme in that fake empire, asked his friend what it was that seemed to hold him together.

But, by now, the clock began to strike as McQueen went to Mexico looking for a miracle cure to the cancer that was killing him. He didn’t find one.

By then, however, if only tentatively, McQueen had found something — or Someone — else. He asked to see the Evangelist Billy Graham. The movie star told the older man that he was now a Christian. He believed no longer in himself but in God’s only-begotten Son. They prayed together. Touched by the younger man’s obvious sincerity, Graham handed him his Bible.

Shortly before he died, McQueen said, “My only regret in life is that I was not able to tell people about what Christ did for me.”

On his coffin was laid the Bible that had been given to McQueen just days previously.

It was open at the following verse: “For God so loved the world, that he gave his only begotten Son, so that whosoever believeth in him should not perish, but have everlasting life.”