Hammer and Nigel on ratings roll

Indianapolis, IN (July 19, 2019) — In two short years, Jason Hammer and Nigel Laskowski have made a big name for themselves in news-talk radio.

While “The Hammer and Nigel Show” is flourishing now, WIBC-FM 93.1 took a big risk in 2016 putting the two former rock ’n’ roll disc jockeys at the helm of a news-talk program, the station’s bread and butter.

The station took an even bigger risk when it moved the show to WIBC’s key afternoon-drive time slot. Today, with audience growing and ad sales booming, the move is paying off. 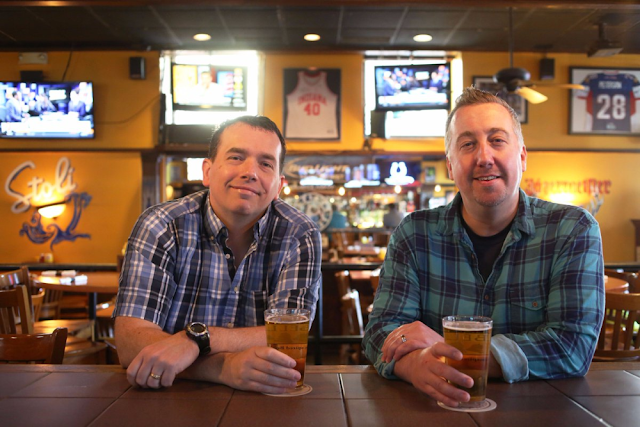 Hammer and Laskowski, both Hoosier natives, host a show that is so popular, the Emmis Communications Corp.-owned station is moving an hour of the popular syndicated Dana Loesch show to expand the local show.

“This has nothing to do with the Dana show not doing well,” said David Wood, WIBC’s program director. “This has everything to do with expanding a local show that is doing really well and that is still growing its audience. We think by starting an hour earlier, we’ll get an even bigger bump.”

The move has as much to do with expanding ad inventory as audience size.

“The Hammer and Nigel Show”—which currently runs 4-7 p.m.—has become one of WIBC’s highest revenue generators, sometimes selling out its ad inventory. The show runs 15 to 16 ads an hour, or 48 total for a sellout. So Emmis officials decided to start the show at 3 p.m. beginning July 29.

“Right now, ‘The Hammer and Nigel Show’ is a must-buy if I’m buying for an advertiser seeking the male audience. They own the male 25 to 54 [demographic] during their time slot,” said Bruce Bryant, president of locally based Promotus Advertising. “The fact that they’re selling out their show to the extent the station wants to expand it by an hour is a real strong statement about the strength of the show.”

The reason advertisers love the show is simple: It’s hitting its target audience like a sharpshooter at close range.

In the last six months, it ranked No. 1 in the market in four months and No. 2 in two months in the sought-after audience of 25- to 54-year-old men. In that demographic, it battles with classic rock stalwart WFBQ-FM 94.7 for the top spot. “That’s an important demo because it’s been proven to be one with a lot of expendable income,” Bryant said.

The show also has done better than many news-talk programs with women. In June, it scored a 5.5 share among all listeners in the 25 to 54 demographic in that time slot, which ranks it No. 7.

“‘The Hammer and Nigel Show’ is a bit different from your traditional news-talk show,” said Kristine Warski, media director for MKR, a local full-service advertising agency. “They’ve fused news and entertainment and, by doing so, are attracting a younger audience than news-talk has traditionally.”

The news-talk audience has seen an uptick in size nationwide in the last three to five years as radio stations have successfully mixed entertainment and commentary with news and politics. The format’s biggest audience has traditionally been older men.

The intense political environment—juiced by the Donald Trump presidency—has also fueled radio’s news-talk format. And while the growth of the internet has hurt some formats, not so with news-talk, experts say.

“The growth of digital platforms and social media have gotten a lot of people fired up about news, current events and politics. As a result, you’ve got a lot more young people opting in to news-talk these days,” said Scott Uecker, a University of Indianapolis communications instructor and general manager of WICR-FM 88.7. “The news-talk format, if done right, is very strong right now.”

And with presidential, gubernatorial and mayoral elections looming in 2020, “The Hammer and Nigel Show” is positioned to grow even more. “There’s going to be a lot of political ad dollars flowing into this market and candidates are going to want to reach engaged voters,” Uecker said. “And listeners of a show like ‘Hammer and Nigel’ are likely to be more engaged.”

Most ad buyers say this market will see millions of dollars in political advertising in 2020—spread across radio, television, print, digital and outdoor.

But Uecker said there’s more to the growth of the show than just its position to snag political ad revenue. “Radio is about connecting with an audience, and Hammer and Nigel are really good at connecting with an audience,” he said. “They’re talented individuals and good communicators who know how to relate to their audience, so I’m not surprised at the success they’re having.”

Hammer, 41 and Laskowski, 43, attribute their show’s success to its conversational and unique style. “There’s nothing else like it on local radio,” Laskowski said. “There’s no yelling and no finger-pointing,” Hammer added. “After a long day at work, that’s the last thing anyone wants—more yelling and finger-pointing. And that’s what you get with a lot of [news-talk] shows.”

While politics is certainly a big part of the show, Hammer and Laskowski said they spend only about half the time covering politics and the other half talking about pop culture, sports and other news.

WIBC has long been known for conservative—some would say right-wing—content. And while “Hammer and Nigel” might not be as right-leaning as another popular WIBC show, “Chicks on the Right,” there’s little doubt it falls into that category.

Still, neither Hammer nor Laskowski would consider themselves strong conservatives. Hammer said he leans slightly right, while Laskowski calls himself “a moderate.” “We hate everybody,” Hammer said. “I tend to vote against people more than I vote for people.”

There’s no doubt Hammer and Laskowski push the edge. The show recently got a cease-and-desist order from lawyers representing Morgan Freeman, after someone on the show impersonated the actor reading Trump’s tweets. And the duo admits they have no shortage of left-leaning folks who tweet or email their complaints. “We love it when liberals tweet or email us,” Hammer said. “We always tell them, ‘Thanks for listening.’”

There was some initial skepticism the duo would make good news-talk hosts.

The duo approached Wood in 2016 when on-air host Greg Garrison was nearing retirement and WIBC officials were contemplating what to do with the station’s lineup. 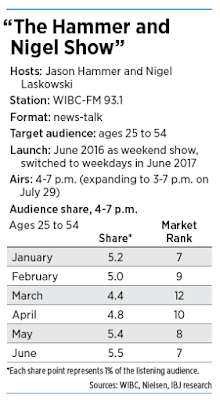 Hammer and Laskowski had been rock ’n’ roll DJs early in their careers. By 2016, Hammer was working as a promotions director at Emmis and Laskowski was doing on-air work for one of Emmis’ Terre Haute stations. They also were co-hosting their own interview-heavy entertainment-oriented podcast.

“We had the best fake radio show in the city,” Hammer said with a laugh. But on a serious note, he noted: “We were trying to find a station to put us on. We knew we could attract a strong audience. It was just a matter of finding someone to believe in us.”

Their current show requires a skill set much different from spinning records. Hammer and Laskowski say they do a minimum of four hours’ preparation for each show. “We’re in constant communication with each other, even when we’re off the air, discussing potential content for the show,” Hammer said.

Hosting a music shift on radio requires minimal talk between songs. “It got to the point I could step in the studio a minute before the show started with no preparation,” Laskowski said. “It was really just a matter of doing short intros and exits. What we do now requires a lot more thought and analysis. Of course, we’re not afraid to share our opinions, but we want to have an informed opinion.”

Laskowski, who started his broadcasting career at 18, had become well-known during a four-year stint ending in 2002 as the nighttime DJ on alternative rock station WOLT-FM 103.3. Hammer made his mark spinning tunes on Top 40 station WZPL-FM 99.5 from 2001 to 2010, where he also did some news and sports.

The two joined forces in 2012 when “The Hammer and Nigel Show” debuted on WOLT, where it gained a cult following. That iteration of the show, however, lasted only a little more than a year before it was cut for budgetary reasons.

Despite being intrigued by the idea of putting the duo on WIBC, Wood told Hammer and Laskowski that Indianapolis-based Emmis wasn’t interested in a replication of their podcast. He wanted something more news-driven, and agreed to give “Hammer and Nigel” a tryout of sorts in June 2016 with a weekend show.

“We heard there was skepticism” from Emmis higher-ups, Laskowski said. “But pretty early on, David Wood had complete faith in us.”

With many radio station owners trying to find the next-generation news-talk format, WIBC executives quickly realized they had found theirs.

“It became very obvious [during 2016] that these guys needed to be a part of the WIBC lineup,” Wood said. “They weren’t the traditional high-brow news-talk-show hosts. They were the guys next door, the guys you want to get your information from because you trust them. And by adding an element of entertainment, Hammer and Nigel have proven that news doesn’t have to be boring.” 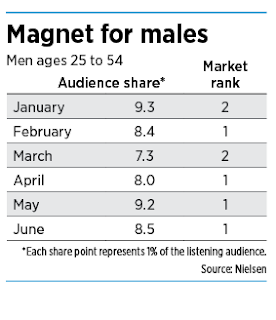 That element has brought the show an audience much younger than the traditional news-talk format, which normally ranks higher with audiences over age 45 and stronger yet with audiences over 55. Advertisers are looking for an affluent-yet-active consumer, and that means listeners in their 20s to 50s, media buyers said.

In addition, Wood said, Hammer, who grew up in Beech Grove, and Laskowski, who hails from Lizton, “are very plugged into the community. They’ve been a part of this community their whole lives, so they’re dialed into it.”

“Hammer and Nigel” got off to such a good start that a national syndicator contacted Emmis about using the pair as fill-ins on national shows when those shows’ hosts were on vacation or hiatus.

Wood opted to rearrange WIBC’s lineup and slot “Hammer and Nigel” into afternoon-drive time in June 2017.

“That’s obviously an important time slot for any radio station, so it was a big decision,” Wood said. “Those guys haven’t let us down in any way.” There’s no thought currently to syndicating the show, he said, because it’s simply too local.

In central Indiana, it has attracted a variety of advertisers, including financial services firms, travel agencies, home improvement companies and others, Wood said.


Ad buyers most often buy bundles of 30-second radio advertisements. Buyers told IBJ that spots on “Hammer and Nigel” run $100 to $300 apiece, based on how big a package an advertiser buys. One buyer called that pricing “strong.” “The demand for advertising has been outstanding,” Wood said. “That’s a big part of the reason why we’re expanding the show.”

While Wood would like to see “Hammer and Nigel” continue to expand its audience, station executives are being careful not to broaden the appeal too much. “If we focus on the core, we’ll likely draw in people on the fringe,” Wood said. “If you try to attract everyone, you end up attracting no one.”

Hammer and Laskowski have no intention of altering their show’s formula. Hammer called Trump “the gift that keeps on giving.” “Because there’s been a four-year buildup of vitriol, the 2020 election is going to be 2016 times 100,” Laskowski said.