Beech Grove, IN  (December 7, 2018) — He filled various positions in the air and on the ground for nearly 37 years in all operations aspects of the Black Hawk helicopters based at the Indiana Army National Guard Aviation Support Facility near Fairland. Now, Kevin “Brick” Kyle is navigating in a different direction.

Kyle, a veteran Black Hawk pilot, instructor, instrument flight examiner, master gunner, trainer and evaluator of others, alongside his wife, Brenda, have owned Harvey’s, a tavern in Beech Grove, “Where Good Friends Meet,” for the past 10 months. 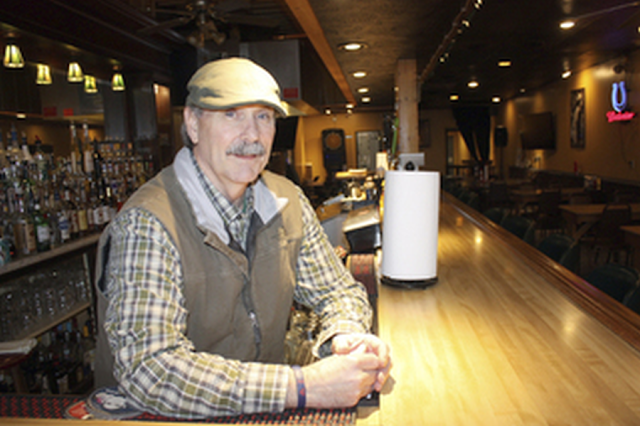 “It’s a joy. I enjoy the people,” Kyle said. “It’s been very enjoyable and different at times. We’ve seen a lot of progress as far as the number of customers. It’s been steady.”

Harvey’s has been part of Beech Grove’s downtown strip for nearly 70 years. Established in 1949, it had a long-standing reputation of being the best bar in town, according to Kyle. But, during the past decade or so that seemed to change. Its longtime owners retired in 2005, he said, and customers shared with them that business had declined.

“We didn’t know why numbers were down until customers started telling us this past February,” he said without elaborating. The Kyles bought the tavern on Feb. 1. “The word is out that there are new owners, so it’s turning around.”

The couple freshened up the décor by adding some framed photos that highlight Kyle’s military career, along with framed photos that preserve the history of the tavern. Brenda also painted a Black Hawk helicopter on the tavern’s front wall. They updated the menu, added weekly specials, and host local entertainment.

While he admitted he is probably like many men who dream of owning a bar someday, Kyle quickly pointed out that he is not the one in charge at Harvey’s.

He’s a co-pilot in this new venture.

“She’s the Boss Lady,” he said about Brenda. “She runs everything. She is the manager of Harvey’s day-to-day operations. I just help on weekends.”

Throughout the week, his time is spent in Edinburgh where 62-year-old Kyle manages the airfield flight services for Himsel Army Airfield Atterbury-Muscatatuck Training Center. The position opened its doors to him upon his civil service and National Guard retirement in 2016.

He was deployed to Guatemala in 1998, completed a tour in Kuwait in 2001 followed by two tours in Iraq. Kyle was also deployed in the year 2000 to Montana for forest fire support and in 2005 to the Louisiana area for Hurricane Katrina. During his retirement ceremony in 2016, Kyle was presented the “Sagamore of the Wabash” supported by Vice President Mike Pence, who was Indiana’s Governor at the time. 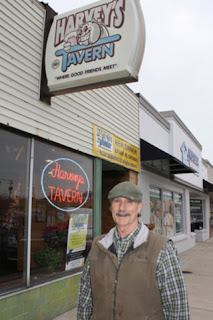 As for the tavern venture, maybe Kyle wasn’t even the driving force to actually purchase the place, even though the ultimate purchase was a joint decision.

“Brenda had always wanted to open up a small wine bar,” Kyle said. “We had been looking.”

A friend told them about Harvey’s being for sale.

“I liked it because it was about the right size for a neighborhood bar,” Kyle said. “It allows for a nice crowd with entertainment and it’s a place where neighborhood people can come and not feel like they’re being crowded out by other visiting customers. People like a place they can call their own. There’s room for everyone here.”

Plus, there is an area next door awaiting future development for Brenda to possibly offer art classes, wine and canvas events, and children’s events, he said. “We have no grandiose plans to become millionaires,” Kyle said. “We just want to make a few extra bucks and enjoy working here.”

Changes to the 614 Main Street gathering spot will happen gradually, the first of which will be noticeable sometime after the first of the year. Harvey’s will be renamed 1949 Tavern to reflect its beginnings.

“We’ll stick to the initial plan, though,” Kyle said. “To build it into something to attract a regular crowd where they can get a drink and food.”