Beech Grove, Indiana (December  24, 2018) — The most wonderful time of year is almost here - with just hours remaining until Christmas Day. During the holiday season millions of children count down the days of December and go to sleep on Christmas Eve, eagerly awaiting the delivery of their gifts from the beloved Santa Claus. 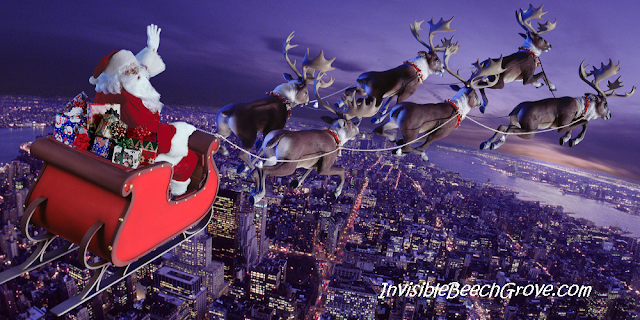 Santa Claus on his way to Beech Grove, Indiana

Santa's journey across the globe - in numbers
Once Santa has made his list, checked it twice and finds out who has been naughty and nice, he sets off on his sleigh with his trusty reindeer, travelling an estimated 510,000,000 km on Christmas Eve - approximately 1,800 miles per second.

Christmas Eve is a busy time for Father Christmas as he needs to visit 390,000 homes per minute - or 6,424 per second. From sherry, beer and milk, to mince pies, gingerbread men and fruit cake, Santa won't be short of energy during his journey, consuming a total of 71,764,000,000 calories.

Santa's travel route
Father Christmas' journey begins in the South Pacific, with his first stop to the Republic of Kiribati, a collection of 32 atolls in the Pacific Ocean. He will next travel west, delivering presents to those in New Zealand and Australia, followed by Japan.

Santa will then visit Asia, Africa and Western Europe, concluding with Canada, the US, Mexico and South America and Beech Grove, Indiana.