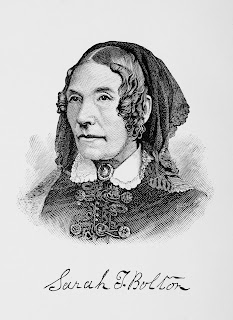 Beech Grove, IN (March 29, 2018) — Sarah Tittle Bolton was Indiana’s unofficial poet laureate from the 1850's until her death in 1893. She was also one of the first poets to gain a following in any of the Midwestern states during the pioneer era.

Born in 1814, Sarah saw one of her poems published in the Madison (Indiana) Banner when she was 14, an astonishing achievement for a girl at a time when literature was considered the province of men.

From that point onward, until she reached 18, she contributed poems regularly for publication in both the Madison and Cincinnati newspapers.

At 17, Sarah married a young newspaper editor, Nathaniel Bolton, and returned with him to the infant state capital, Indianapolis. In 1847, Nathaniel was elected Indiana State Librarian and found his duties included maintaining the Statehouse. In 1850, Gov. Joseph Wright decided to hold an important public reception in the Statehouse, which badly needed cleaning and a new carpet.

Nathaniel Bolton was compelled to buy a new carpet for the reception, and Sarah took on the arduous task of sewing together the carpet pieces in time for the reception. During this ordeal, she composed what became her most famous poem, “Paddle Your Own Canoe,” and submitted it to a Cincinnati newspaper. It was reproduced in many other newspapers and eventually was translated into eight languages, confirming its universal message that a person must take the initiative to achieve what is worthwhile in life:

“…Nothing great is lightly won,

Nothing won is lost;

Will repay the cost.

Leave to Heaven, in humble trust,

All you will do;

But, if you succeed, you must

Paddle your own canoe...”

Sarah Bolton was also an early proponent of women’s rights in Indiana.  In 1850, she aided Robert Dale Owen as he attempted to incorporate the right of women to hold property in the state Constitution of 1851. Much later, she was a close friend of May Wright Sewall, the indomitable advocate for women’s suffrage and equality with men.

In 1855, Nathaniel Bolton was appointed U.S. consul to Geneva, Switzerland by President Franklin Pierce, and Sarah accompanied her husband to Europe, where she traveled in Germany, France, Italy and Austria. In 1858, Nathaniel died, and Sarah returned to Indiana.

In 1871 Sarah purchased a farmhouse southeast of Indianapolis in what is now Beech Grove. She called the story and half cottage “Beech Bank,” after the trees growing nearby. It provided her with quiet and communion with nature, and she began writing poetry again.   Her second best known poem was composed after moving to Beech Bank. It was a tribute to her home state, “Indiana”:

“…She gives the hungry stranger bread

Her helpless poor are clothed and fed

As freely as the Father spread

The feast of mystic manna.

The sick in body, wrecked in mind,

The orphaned child, the dumb, the

A free and safe asylum find.

Unfortunately, Sarah T. Bolton did not find commercial success with her writings.  She published one volume of her poetry at her own expense and lost money on the venture.   But her literary works circulated widely, and she was cherished by some of the next generation of Hoosier authors, such as James Whitcomb Riley, a young poet whom she encouraged and who visited her in Beech Bank.

Although she did not gain wealth through her writings, Sarah Taylor Bolton was recognized by some of the great literary figures of the day as an outstanding poet.  New York newspaper editor and nature poet William Cullen Bryant thought her Civil War poem “Left on the Battlefield” to be one of the greatest war poems ever written and included it in a collection he published of the 50 greatest such poems.

In 1941, Gov. Henry Schricker dedicated a bronze tablet honoring Sarah Bolton’s literary achievements in the rotunda of the Indiana Statehouse. Her home, Beech Bank, has been preserved on South 17th Avenue in Beech Grove.