Beech Grove, IN (October 18, 2019) — If you haven’t traveled by train in a while, Amtrak is summoning you to a new level of comfort on the rails.

For coach trips on Midwestern routes, Amtrak is introducing refurbished Horizon cars that make some riders mistakenly think they’re in business class. From the carpets on up to leatherette seats that promise more lumbar support, it’s an overhaul of cars that have been around since the 1980s. “These cars are workhorses. You’ll find them all over the Midwest,” said Amtrak spokesman Marc Magliari. 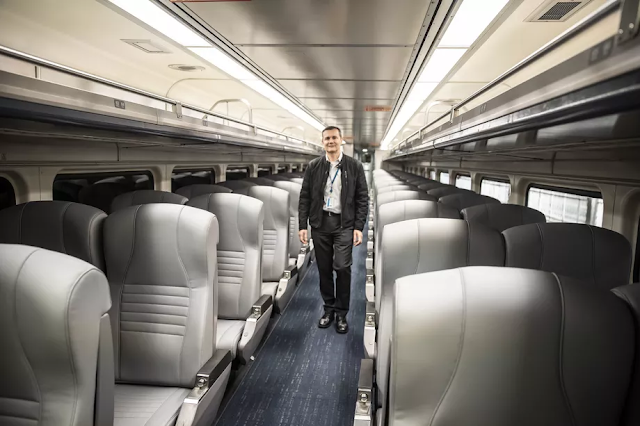 On overnight runs to the East Coast, Amtrak is now using remodeled coach cars, also dating from the 1980s, with plusher reclining seats, suitable for sleeping on the cheap. Called Amfleet II, they still have legroom that puts airlines to shame. “This is like first class but it’s coach,” said Roger Harris, executive vice president at Amtrak.

For those who book the sleepers, the railroad is getting a new fleet with more room for luggage, softer linens, a sturdier pullout table and more power outlets.

The smallest accommodation, the roomette, no longer has a toilet in the compartment in the new Viewliner II railcars. Amtrak executives said passengers never liked the in-room toilet anyway because it took up precious space and your traveling companion had to scram if you wanted privacy.

The new cars have shared bathrooms and shower facilities, but each room still has a sink that flips out of view when you don’t need it. 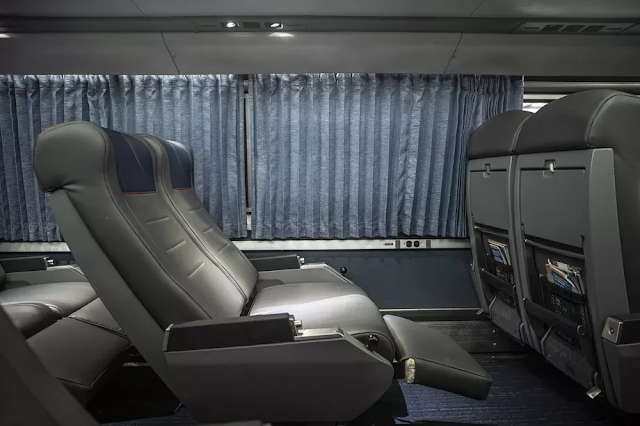 Amtrak officials showed off the cars Wednesday as centerpieces of new efforts to boost ridership. For routes serving Illinois, Wisconsin, Michigan and Missouri, the national passenger railroad works in close partnership with state transportation agencies, which fund 75 percent of the $3 million cost for the new and improved equipment.

He also said the public is gravitating to rail travel as a more relaxed and environmentally responsible way to get around. “I think the trend has definitely caught hold more in Europe, but we’re seeing it today also with customers in congested urban areas [and] with younger customers,” Harris said.

Overall Amtrak ridership was up about 1 million last year to 33 million people, he said.

The refurbished coach cars are being added to Midwest trains through next spring, while the overnight routes to the East Coast all will have them by yearend, Amtrak officials said. The work is being done at Amtrak facilities in Chicago, Beech Grove, Indiana, and at a contractor in West Quincy, Missouri, Magliari said.

The new Viewliner II’s are made by CAF, a firm headquartered in Spain and with U.S. manufacturing in Elmira, New York. Larry Chestler, vice president for long distance service at Amtrak, said two of 25 cars have been delivered, with the rest due to arrive in 2020.