Beech Grove, IN (March 8, 2019) IBG — In a quiet gym after practice Wednesday, Beech Grove assistant Jason Hess sat in the first row of bleachers with tears streaming down his face. Five seconds passed. Ten. Fifteen. “Sorry,” Hess said, breaking the silence. “It’s just hard.” It has been a season of tears around Beech Grove basketball. Not only tears of sadness, though there have been plenty of those since coach Matt English succumbed to brain cancer Dec. 10. 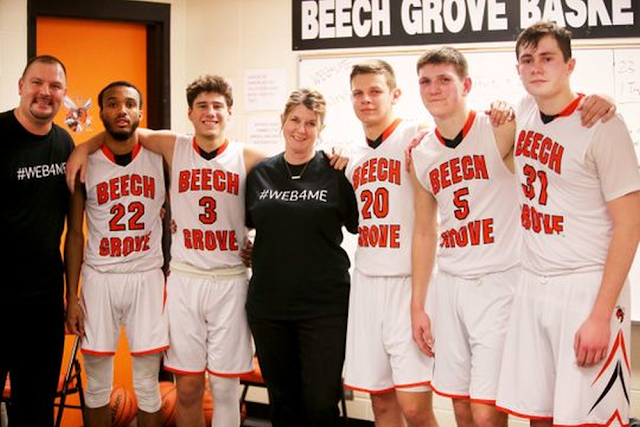 After Beech Grove’s 48-45 comeback win over Manual that night at Danville, the coaches and players cleared a path so she could climb the ladder and be the first to clip a piece of the net. Matt English never won a sectional during his 10-plus seasons at Beech Grove. But this one will go on his record. Beech Grove, coached by English’s former assistant, Mike Renfro, will attempt to take the next step Saturday in the Class 3A Greencastle Regional. The Hornets (17-7) will play host Greencastle (21-4) at 10 a.m.

The winner will face Crispus Attucks (18-8) or Owen Valley (14-12) for the regional title at 8 p.m. “I could feel coach English in the gym at the end of the game,” senior guard John Parker said. “There’s nothing like it. It’s a great feeling knowing it’s not just us out there by ourselves and we have great support from our community. I think that’s how we pulled that one out against Manual.” While there is business at hand on Saturday, the week between games has offered a chance for a bit of reflection on the accomplishments of the team – on and off the court. Hess’ son, 6-2 senior Gavin Hess, is the team’s second-leading scorer and leading rebounder. If the balanced Hornets make it through the regional, Hess will likely play a key role.

But whenever the book is closed on this Beech Grove season, it will not necessarily be the game details that Jason Hess remembers most. His own father, David Hess, is fighting a battle. David was diagnosed with inoperable lung cancer in September 2017. David, who graduated from Beech Grove in 1974, has been receiving radiation and chemotherapy for the past 15 months and was honored in February at the school’s annual Coaches vs. Cancer event put on by Matt and Angela. “My father talks about Matt all the time as an inspiration for him,” Jason said. “He never thought the disease was crippling to Matt. My father is a tough guy. He doesn’t talk about it a lot. But throughout his journey, he took a lot from Matt.” Gavin took a lot from English, too. 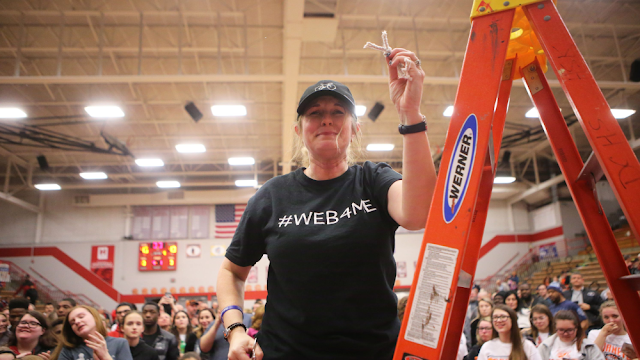 That is the part that brings the tears to Jason’s eyes. Gavin was a quiet kid when he came in as a freshman – and still is. But there was a connection that English made with Gavin that Jason can still see come through in his son. “Matt is a like a dad to a lot of these kids,” Jason said. “And he always made it very obvious that he believed in my son, which meant the world to me. When you see your son crying for another person, that’s hard to watch. I always knew how much he cared for him, but Matt did so much for these kids.” Angela presented gifts to the senior players on senior night.

One of her presents to Gavin was a Pearl Jam T-shirt that Matt often wore. “Without him, we definitely wouldn’t be in this situation,” Gavin said. “It is about winning basketball games, but it’s also about playing for him and the whole community.” There has been an outpouring of support not only from the Beech Grove community, but all over the state and beyond. Renfro said that by the time he checked his phone after the game, he had 88 text messages offering congratulations. Villanova coach Jay Wright, who coached Renfro at Hofstra in the late 1990s, and Boston Celtics coach Brad Stevens, were among those to reach out. “In the end it’s about those kids,” Renfro said. “It’s a vision Matt and I had five years ago to change the culture of Beech Grove basketball and get it back to where it was being that team nobody wants to play every time we take the court.”

In a quiet moment alone in the locker room before the sectional championship game, Renfro looked up and told English he expected him to be there with him on the sideline. “I need all the help I can get,” Renfro said. All of the opposing coaches have signed the back of the chair where English’s hard hat and lunch pail sit for every game. “At the end of the season we’ll give that to Angela,” Renfro said. “Hopefully here in about three weeks.”