Beech Grove, IN (August 29, 2019) — Volunteers of all ages gathered at Mt. Comfort Church to pack small bags of rice, vegetables and vitamin supplements. While the food was packed into compact bundles, it’s intended to have a big impact: The packaged meals, 30,000 of them in total, will be transported to Haiti. 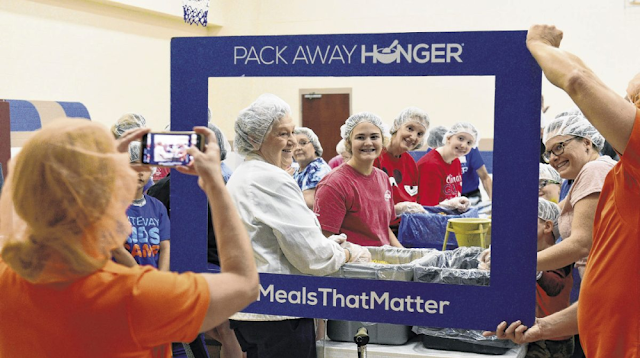 Volunteers with Pack Away Hunger at Mt. Comfort Church pause for a photo suitable for social media as they work. Tom Russo | Daily Reporter

Ethan Maple, a pastor at Mt. Comfort Church, was one of the event’s organizers. “We’ve had probably about 150 volunteers participate, between all four churches and the community. We had some organizations hear about what we were doing and wanted to participate, so we’ve welcomed them as part of the team,” Maple said.

Maple said the components for the packed meals cost about $10,000. He said this was the largest project the four area United Methodist churches had worked on together, and they hoped to continue collaborating in the future.

“We’ve pooled our resources to come up with that $10,000, we’ve pooled our volunteers to do the packing, and we’re going to make a big splash, hopefully,” Maple said.

Pack Away Hunger, which is based in Beech Grove, works with both local food pantries and shelters in Indiana and with organizations around the world. Because the four churches had such a large pool of volunteers, they decided to focus on packing meals for Haiti, where the need is currently one of the world’s greatest, Pack Away Hunger staffer Lisa Patton said. 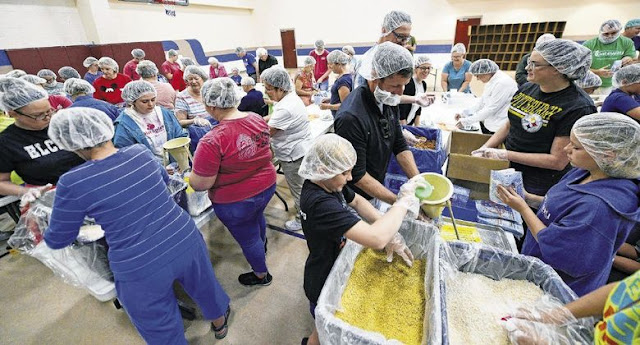 With each one among dozens of volunteers making individual contributions, the group assembled 30,000 meals to go to Haiti. Tom Russo | Daily Reporter

The meals packed by the organization are called “Nutri-Plenty” meals and contain a mixture of rice, soy, vegetables and flavoring as well as “a scientifically proven blend of 21 vitamins and minerals shown to help alleviate and also reverse the effects of micronutrient malnutrition in young children,” according to Pack Away Hunger’s website. They are intended to contain the maximum possible nutritional benefit while still being easy to transport across the globe.

Once the meals are packed, they are distributed by Pack Away Hunger via partnerships with local organizations in Haiti. The organization also distributes meals in Guatemala. Haiti, one of the poorest countries in the Americas, has experienced both political crises and natural disasters leading to widespread food insecurity. According to the nonprofit World Food program, 50 percent of Haitians are undernourished. 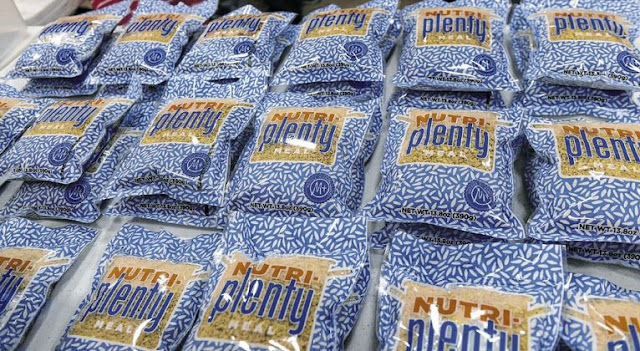 Patton said the Pack Away Hunger model allows everyone, including young children, to contribute something concrete to a charitable cause. Nine-year-old Bryn Spruenger helped pack vegetables and spice packets at the event and said it felt good to do something for those in need.

“It’s an opportunity for the whole family to give back to those in need,” Patton said.

“Even if they don’t have houses, they could at least have stuff to eat and they could stay healthy,” Spruenger said.

Korey Collier, who attends New Palestine Methodist Church, volunteered at the event along with his wife and children. He said it was inspiring to see people from the four congregations come together for a common cause. “As a family, we’re trying to instill thankfulness in our kids for what they have. For them to realize that there are kids in other parts of the world that don’t have food to eat everyday, we try to open their eyes to that reality,” Collier said.

Once the meals are packed, Pack Away Hunger distributes them to children in need via a partnership with Nehemiah Vision Ministries, which is also based in Indiana and operates schools and healthcare services in Haiti. 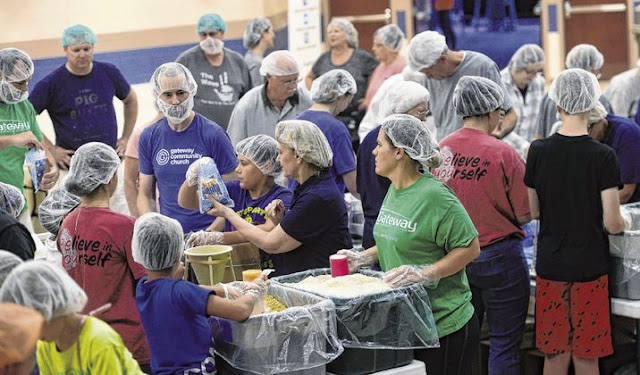 Volunteers add ingredients to food packets that will be sent to Haiti, where malnutrition affects as much as half of the population. Tom Russo | Daily Reporter

Maple said he thought the event was a powerful demonstration of what churches and communities can accomplish when they come together to work as one.

“It doesn’t matter how old or young you are, this is an event that everybody can get involved in, and it’s an opportunity to serve,” Maple said. “All these people who are serving, they may just have a little small part in putting part of the meal pack together. But the impact they have, what we’re doing together, is huge.”

Patton said Pack Away Hunger is always looking for people to get involved and sponsor events. “The need here in Indiana is great, unfortunately,” Patton said. For more information on sponsoring or joining an event, visit PackAwayHunger.org Monetary donations can also be made online.