Beech Grove, IN (August 1, 2019) — As the month of August kicks off, we revisit a topic that went National this time last year, the city's ban on mobile ice cream trucks. Almost everyone loves ice cream and with local elections gearing up, a few folks wonder if anything will change. 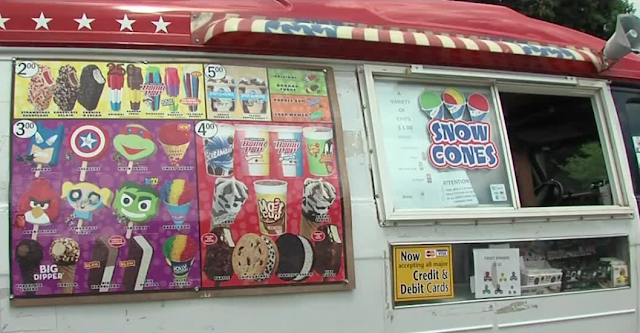 Below is the reprint of the August 24, 2018 news story from along with a video

BEECH GROVE, Ind. -- If you live in Beech Grove you won't be hearing the ice cream truck music anytime soon, but you may still have politicians knocking on your door.

For Blake Chaney, driving an ice cream truck is a family business.

“What’s the harm in having an ice cream truck coming down the street,” said Chaney. “It really doesn’t make sense to me. I wish they could change that.”

Beech Grove does not permit ice cream trucks or door to door salesmen to sell their products in neighborhoods. Although not for profits and politicians face no limitations when knocking on doors.

“Unfortunately, politicians are allowed,” said Mayor Buckley. “I wish we could do away with them as well, but a lot of people don’t want someone knocking on their door.”

He says licensed food trucks and ice cream vendors can park and sell their items, they just can’t be mobile.

“Everybody wants what’s best for their community and in order to have a good morally sound community you have to take a stand on certain matters,” said Mayor Buckley.

Mayor Buckley says Chaney does have a right to petition city council members to change the ordinance.


The Nationally syndicated Hammer and Nigel Show conducted an interview on August 27, 2018.

Sorry Beech Grove, No Mobile Ice Cream for You!

There are few pleasures of a childhood that can compare with the quaint and charming experience of hearing the slightly off-pitch music of the ice cream man, running into traffic after his rusted-out van, and paying exorbitant prices for half-melted generic-brand treats.

Yes, with the wisdom of adulthood, you realize the ice cream man was likely a convicted felon who made the decision upon release to paint and convert his existing windowless van and go into business for himself. It's a double victory for a recently paroled pedophile gone legit: make some money and still be around kids.

But the ice cream man best stay out of Beech Grove, Indiana, according to Mayor Dennis Buckley, who told WIBC hosts Hammer and Nigel that the city does not permit ice cream trucks or door to door salesmen to sell their products in neighborhoods.

“Unfortunately, politicians are allowed. I wish we could do away with them as well; a lot of people don’t want someone knocking on their door.”

Mayor Buckley explained that licensed food trucks and ice cream vendors can park and sell their items, they just can’t be mobile.

"If you come into the city and sell food, who is to say that food was prepared in the right way? There has to be some provisions along with the Marion County health department that protects the people wanting to buy the food.

So if you want to have a food truck, that's no problem. You get a permit through the city, you show proof of insurance, you show your latest health department certificate, and then you can set up your shop in a stationary position."