Beech Grove, IN (November 6, 2019) IBG — Two massive brick warehouses have been a part of the landscape for more than a century. One of the buildings has a concrete sign that reads 1907. The other reads 1910. Both belong to Amtrak, which maintains its fleet here.

Most of the trains that come into this facility don't stay long. The big silver cars Amtrak is known for make a stop here, get repaired and return to service. 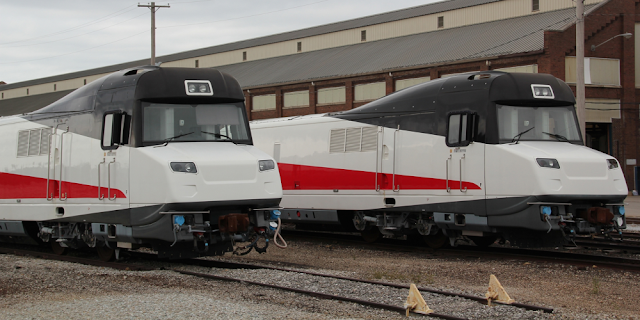 But in the front of the rail yard, there are two trains that never move.

Workers at the Beech Grove Amtrak facility pass these trains every day as they head past the front gate. They’re right next to the parking lot, just on the other side of a chain link fence. Weeds are growing up through the gravel next to their wheels. But they look different from the other trains there — they’re shiny white with a bright red stripe.

These are the trains the state of Wisconsin paid for, and at one point intended to run. But they never ran in Wisconsin, or anywhere.

Before Gov. Scott Walker successfully blocked the high-speed rail line that would have connected Madison to Milwaukee in 2010, Wisconsin bought two trains from a Spanish company named Talgo.

The story of these trains is messy. And in a way, they're the physical reminder of the debate Wisconsin had almost a decade ago. While it's hard to say exactly when that story began, you could make an argument that it started when Wisconsin became a state in 1848.

The people who founded the state felt strongly about what government should and shouldn't do, and they spelled that out in the Wisconsin Constitution. One of the things they didn’t want Wisconsin to get into was borrowing money to build infrastructure, like roads and bridges.

Other states had gotten into money trouble by borrowing too much, and Wisconsin's framers were going to nip that in the bud. But times changed, and so did peoples' expectations for government. Over the years, voters amended the Wisconsin Constitution to allow borrowing for highways, forests, airports, port facilities and the like.

But even up until just a few decades ago there was one thing the state of Wisconsin couldn’t borrow for: railroads. And in 1989, then-Democratic state Sen. Joe Czarnezki of Milwaukee wanted to change that.

He introduced a proposal to end Wisconsin's 141-year-old ban on borrowing for railroads. And in 1992, voters passed it. "I don't know if we were visionaries, but it certainly was something where we were looking toward the future," Czarnezki said.

One year later, then-state Rep. Spencer Black, a Madison Democrat, wanted to put this borrowing power to use. He sponsored a plan that would give the state the power to borrow up to $50 million for railroads.

"I was concerned about transportation policies," Black said. "I felt it was too oriented toward building large new highways. It was neglecting nonautomotive transportation such as transit and rail transit."

To increase the chances of it passing, Black got it added to the state budget. The story of the day the Legislature voted on that budget is particularly interesting in the grand scheme of the high-speed rail saga. On that same day, according to the official Assembly journal from July 16, 1993, a 25-year-old lawmaker was sworn in. He had just won a special election for an open Assembly seat in the Milwaukee suburbs.

His name: Scott Walker, the future governor who would one day vow to kill Wisconsin's high-speed rail line. And on Walker's very first day in office, he got to vote on the budget.

And Walker voted "yes" — including on the $50 million in railroad bonding.

With Walker's help, the budget bill passed and Wisconsin could get into the railroad business.

It would be 16 years before Wisconsin state government would decide to use this power.

After President Barack Obama signed the federal stimulus bill in early 2009, it looked like high-speed rail was about to take off in the United States. The stimulus set aside $8 billion for high-speed rail, and states like Wisconsin were about to compete for pieces of it.

And Wisconsin was getting ready for this rail boom.

On July 17, 2009, Democratic Gov. Jim Doyle announced the state was making a deal with a Spanish train manufacturer called Talgo. "Today is a day that I believe we mark a major new start for transportation in the Midwest and in the United States," Doyle said.

Doyle said Talgo would open a manufacturing facility in Wisconsin and build two brand-new train sets for the state. He described it as a historic moment, imagining a future where passenger rail travel would thrive in the Midwest, with Wisconsin at the center of it.

Talgo, which had long dreamed of becoming big in the U.S., was also celebrating that day. "We have been patient," said Jose Maria Oriol, whose great-grandfather founded the company. "And now we can say that the dream in the Midwest (has) become a true reality."

Doyle's Secretary of the state Department of Transportation Frank Busalacchi was also there that day. Busalacchi had signed the contract with Talgo just days earlier. He said he helped design the trains. "I was able to pick the colors and I picked white with red trim, the Badger colors," he said. "And they were absolutely stunning."

But before the deal could be finalized, it had to be voted on by members of the state Legislature’s budget committee, the Joint Committee on Finance. It would be the first time Democrats and Republicans would debate this issue in public.

In 2009, Democrats ran the budget committee, just like they ran everything else in state government, so there was little doubt that the Talgo deal would pass.

But Republicans on this committee had a huge problem with the contract, namely the way it was reached by Busalacchi and Doyle.

From a procedural standpoint, there are a couple of ways the state can seek bids on a project like this.

One option is to open it up to private businesses to bid on through what's known as a "request for proposal," or RFP. The process for an RFP can be slow, but the idea is that it helps the state get the best bang for its buck. Other times, the state issues what's known as a "request for information," or RFI. While completely legal in Wisconsin, the requirements for an RFI are a little more relaxed, and the process is faster.

In the case of the Talgo deal, the Doyle administration chose an RFI. They started the process on Feb. 6, 2009, and Talgo was the only company that said it was interested.

Republicans on the budget committee, like Republican Rep. Robin Vos of Rochester, were livid about this.

"I looked on Wikipedia for what the definition of sweetheart deal is," Vos said. "It's a term used to describe an abnormally favorable arrangement. And it says sometimes it involves government officials and hints at the presence of corruption ... I cannot imagine a better definition in the state of Wisconsin for a sweetheart deal than the one you are presenting to us today."

But, Vos and his fellow Republicans were in no position to stop this train in 2009, so the Talgo deal passed on an 11-4 party-line vote. Wisconsin could officially use the nearly $50 million in rail bonding to build the Talgo trains in Wisconsin.

The End Of The Line

This wouldn’t be the only time the Talgo deal needed the Legislature’s approval — and in 2012, when it did — the political circumstances couldn’t have been more different. Walker had been governor for more than a year, and the Legislature was more Republican than it had been in decades.

Vos, the state representative who was critical of the Talgo deal back in 2009, was now the chair of the budget committee, and Republicans had a 12-4 majority.

On March 14, 2012, the DOT asked the budget committee for $2.5 million toward a permanent maintenance facility for Wisconsin's Talgo trains. This was always part of the deal with Talgo.

Technically speaking, Walker's DOT was asking the budget committee to vote "yes" at this meeting, because it had to. Wisconsin had a contract with Talgo and that contract included this maintenance facility.

"We had a contract," said Mark Gottlieb, Walker's DOT secretary at the time. "It was the administration’s job, in my opinion, to execute that contract and fulfill the state's obligation on it unless, and until, the Legislature told us that they were going to exercise their authority not to appropriate the money."

In other words, the Walker administration would keep its end of the Talgo deal unless the Legislature decided to break it. By this time, the trains themselves were just about ready, but the rail line between Madison and Milwaukee was already dead.

Wisconsin's Talgo trains in the process of being built. Photos courtesy of the Wisconsin Department of Transportation

That meant Talgo's trains would only ever run on the existing Amtrak Hiawatha line between Milwaukee and Chicago, which was one of the busiest routes in the country.

According to a DOT study, that inflated the costs. It found that running and maintaining two new Talgo trains from Milwaukee to Chicago would cost $10 million more each year than keeping the state's old Amtrak trains.

"I do not believe that it is my responsibility to just turn a blind eye," Vos said. "It's not my job to fulfill a bad contract, to do something that is a bad decision for the state."

According to court documents, the trains have been at the Beech Grove Amtrak facility in Indiana since the spring of 2014. Talgo is paying to store them there until they are sold or leased. 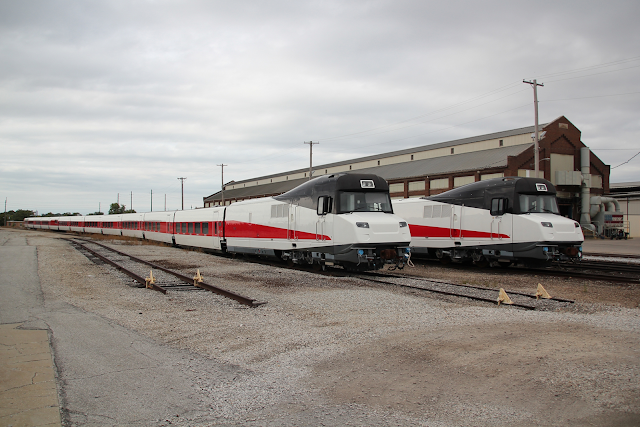 There is a chance these two trains could be sent to run on the Amtrak Cascades line through Washington and Oregon. These were not the only trains Talgo built in Milwaukee — the company also built two other identical sets to run in Washington and Oregon, which have been in use there since 2013.

The FRA granted Amtrak that waiver in November 2018, but Amtrak still hasn’t decided if it will actually use the Wisconsin Talgo trains.

And until something changes, Wisconsin’s trains are still going nowhere.