Beech Grove, IN (February 20, 2019) IBG — Every district in Indianapolis is tentatively slated to get more state dollars per student under House Republicans’ 2019 budget plan released this week — exceeding some school leaders’ expectations. For the most part, new money added to the budget to fund each student along with higher enrollment estimates are driving the increases. 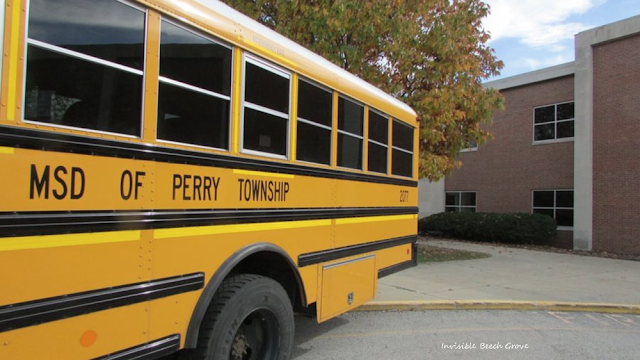 But even though some districts are projected to lose students, they would still get more money because of changes to Indiana’s funding formula that add money for vulnerable students and because lawmakers put more money in the budget overall. “I just didn’t think they’d be able to reach that level when they started the session,” said Patrick Mapes, superintendent in Perry Township. “It’s very much appreciated.” In Indianapolis Public Schools, the city’s largest school district, per-student funding is expected to go up more than 3 percent to $8,029 from $7,764. Overall, the district would see about 4 percent more in total state dollars.

Compared to other districts, IPS receives more per student in part because of the number of students there from low-income families. Having more English-learners and students with disabilities can also bring in additional funding per-student. “There are still too many moving pieces in other parts of the comprehensive budget proposal to get a clear picture of what this will ultimately mean for our students and employees,” an IPS spokeswoman said in an emailed statement.

The estimates are far from final, as the Senate will still offer its own budget draft and lawmakers will eventually have to come to a compromise. But the House draft, which easily passed out of the Ways and Means Committee on Monday, will likely see support from the full House in the coming week. This year, district funding estimates could be even more volatile because of problems with a calculation that drives extra aid to districts with larger shares of students from low-income families. 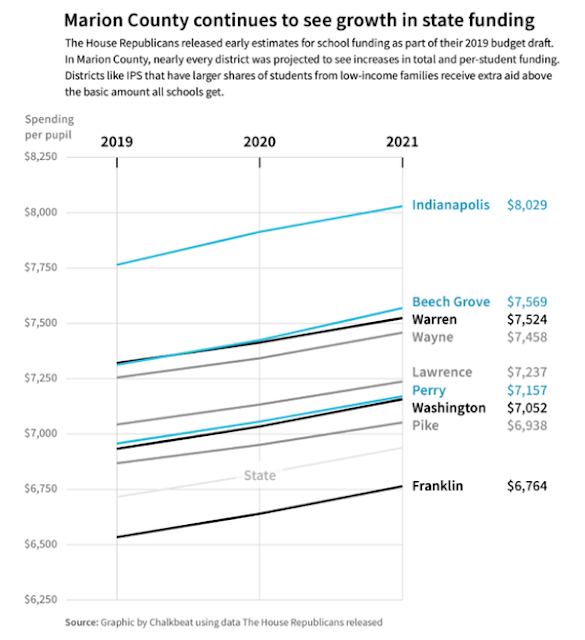 It’s unclear how this might affect schools because the calculations were not changed from last year. “We used the numbers that we felt gave schools the most realistic proposal,” said House Ways & Means Chairman Todd Huston. He said that he was not sure when more accurate projections would be available, but House Republican staff was working with other state agencies to dig into the problem. The budget draft proposes increasing Indiana’s contributions to schools by $461 million — or 4.3 percent — through 2021, a little more than increases in years past. The basic per-student funding that all districts get would jump from $5,352 per student this year to $5,442 per student in 2020, and $5,549 per student in 2021.

House lawmakers also made some big overall changes to how schools are funded that do more to support some of the state’s most vulnerable students. Funding for preschool for students with disabilities increased for the first time in more than 25 years, going from $2,750 per student currently, to $2,875 per student in 2020, and $3,000 per student by 2021. In 2018, about 13,000 students qualified for the program, costing the state about $36 million.

The increased grant would up those totals to about $37.3 million in 2020 and $39 million in 2021. The budget draft would also send more money to educate students learning English as a new language for the fourth year in a row. Last year, lawmakers set aside about $32 million. Over the next two years, there’d be more than $40 million available for grants, at $325 per student, up from $300 previously. Higher per-student grants for English learners would help the district shift more money to teachers and other employees, said Mapes, the Perry Township superintendent.

Raising teacher salaries has been a hot topic during this year’s legislative session, and while money is not specifically earmarked for raises in the House budget plan, Mapes said it doesn’t need to be. “That’s local control,” Mapes said. “We have an elected school board whose job is to make that decision for each school corporation in the state. It’s not the job of the legislature to direct down a salary schedule.” In Beech Grove, the funding forecast is slightly less optimistic — the district is the only in the county projected to lose funding overall through 2021, by a small margin of less than 1 percent.

That’s driven by a projected loss of about 116 students out of a total of 3,033. “We all need to take three steps back and not panic because … there’s a factor here that’s real critical — the standpoint that our enrollment has gone up for nine straight years until this year,” said Paul Kaiser, superintendent in the district. Lawmakers “are estimating our enrollment is going to continue to drop.”

He said he isn’t sure why enrollment was down last year. “We’re hoping last year’s drop in enrollment was a blip on the horizon,” Kaiser said. “And if it’s not, then we’ll have to decide what we want to do.” Part of Kaiser’s strategy is going to district voters in the fall to ask them to approve a tax increase — a move many school districts across the state, including IPS, are increasingly making to bring in more revenue.

One group that would see reductions under the House plan were virtual schools and virtual programs operated by school districts — they were cut from 100 percent of what students in traditional schools get to 90 percent, equivalent with students at virtual charter schools. Lawmakers made the change in response to a rapidly growing virtual school in the Union school district, near Modoc, helped throw off school funding estimates in 2017.

Even with the funding cut, budget projections show Union still would receive more state money, driven largely by growing enrollment. House Republican staff did not confirm whether the change in all district-based virtual school funding resulted in cost-savings for the state.