Noblesville, IN (July 17, 2019) — Sunday afternoon, Betsy Reason, the editor of The Times in Noblesville, Indiana received a news tip that an artist was painting a mural of a train under the railroad bridge, on the underpass wall, near the Forest Park boat launch in Noblesville.

So she grabbed her camera and headed that way.

After parking her car in the Son Shine Service lot on the south side of the bridge, she nervously walked north alongside the busy Indiana 19 and under the bridge until she was in sight of an artist painting the underpass wall. 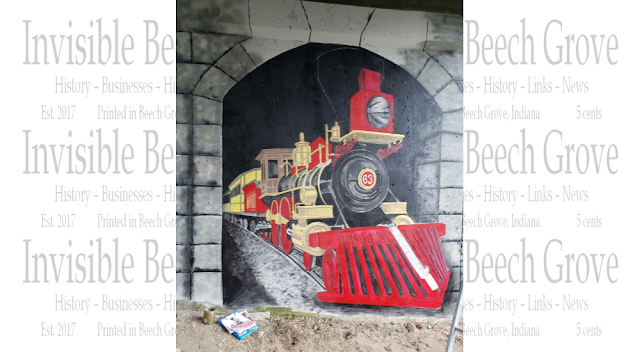 His blond hair was tied back in a ponytail, and he wore a do-rag and headphones. She assumed he was listening to his favorite music.

The mural that he was painting -- of the Leviathan steam locomotive No. 63, in red, black and gold, exiting from a block railroad tunnel -- was beautiful.

He caught a glimpse of the journalist before she climbed over the guard rail, but he kept painting. She walked up closer to admire his work. By that time, he had removed his headphones.

She introduced herself, then he.

The 46-year-old mural artist was Travis Neal of Broad Ripple, and he was selected from applicants who responded to a Noblesville Parks & Recreation and Hamilton County Tourism/Nickel Plate Arts open callout for a commissioned mural artist.

The original concept started as a “White River monster,” he said, “a tall tale from the 1800s of a Loch Ness-style sea serpent” lurking in White River. The City wasn’t thrilled with the concept, so decided to change the theme. “So we went with the train,” Neal said, describing the Leviathan, a re-creation of the Lincoln Funeral Train, which stopped in Noblesville five years ago.

He started painting the mural Saturday morning, doing all of the blocking in and shading. The color work started Sunday. He was hoping to finish it up over the weekend. However, the sun became too intense on the mural before he could finish. So he’ll return again soon to complete the project.

“The detail work is taking a little longer than I anticipated,” Neal said of the 16-by-10-foot wall mural that may be a little wider.

The prep work included a masonry primer and pressure washing the wall. Darren Peterson, president of Nickel Plate Arts, an architect, artist and member of Noblesville City Council, volunteered his time to help prep the wall and gridded out the blockwork, to make it look like blocks, around the opening of the mural’s railroad tunnel. Peterson worked the early part of Saturday and Sunday with the mural artist.

‘The train’s all me,” Neal said proudly.

He answered interview questions between the sound of passing traffic under the railroad bridge. “Trucks are a nuisance,” he said, shaking his head. A few minutes later, he said, “The canoe buses are a nuisance. They go too fast, and they are really, really loud,” as one of the buses passed.

But he likes the spot. “I’m pretty thankful that I’ve been able to work in the shade. The traffic is kind of a pain in the neck, but it does provide a breeze.”

Neal said he’s enjoyed painting the mural. “It’s a labor of love. If I could do this full time, I would be a very happy boy. Every project is a new adventure, new challenges. I really enjoy that,” said the artist, who researched the train to figure out how to best portray the locomotive, which the City approved before starting on the wall.

“With shade like this, it will practically last forever, especially with the extra UV coat on it,” he said.

In total, he expects to put in 20-24 hours painting the mural.

While there has been a lot of traffic passing by, he said, some drivers have stopped. “Lots of people. People are very gracious.” 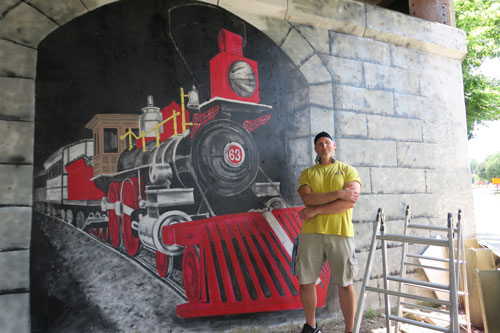 Neal has been an artist all of his life. “The mural thing kind of took off when I moved into my house in 2000 and painted my dining room wall kind of a tribute to my mom, a 12-foot-wide reproduction of (Vincent van Gogh’s) ‘Starry Night.’ Ever since my first taste of working large scale, that’s what I wanted to do,” he said.

In summer 2018, he painted “Aquarium Surprise,” a cat looking in an aquarium, a wrap-around mural on the traffic control box at 116th Street and the pocket park in Fishers. He has painted murals all over the state, including Sailor Jerry murals, for bars and restaurants, all unique to each establishment, including the Free Spirit Lounge in Indianapolis. He does a lot of commercial work, particularly reproductions of logos.

The mural business is mainly weekend work. During the week he manages a Signarama sign shop in Carmel. Neal, an Indianapolis native, graduated from Beech Grove High School. He’s a member of One Zone Chamber of Commerce that serves Carmel and Fishers, spends a lot of time on Geist Reservoir and golfs often in Hamilton County. He has a wife, Carole, of 25 years in September, and they have three cats.

The project carried a commission and materials fee of $1,000 for completion and installation of the artwork on the wall. Noblesville Parks & Recreation and Nickel Plate Arts made the final selection from artists who submitted their applications by May 16.

This “art installation” of the Leviathan steam locomotive would “help drive local engagement,” “beautify the boat launch area” and “serve as a local landmark,” the callout said on the Nickel Plate website.

Neal agreed to collaborate with the Noblesville parks staff to confirm a design that would be “community friendly” and “ideally ties into Noblesville history, Indiana history and/or the local community.”

“I think Travis was the perfect fit to this project. It’s a project that is physically really challenging because of its location,” said Aili McGill, executive director for Nickel Plate Arts in Noblesville. Being that there were a few entities involved, and the design changed from the first mural mockup, and it became a little trickier to implement, she said, “Travis has just the right personality to balance all of that, and he also has all of the skills we wanted. He’s incredibly talented.” She’s hoping that other artists who applied can be worked into future projects.

Over the weekend, social media was abuzz with comments on the Nickel Plate Arts’ Facebook post, picturing Neal and Peterson working on the mural together.

The majority of the Facebook comments were positive about the art.

But there were some who asked why the Leviathan reproduction was chosen over a locomotive that might have been more relevant to Noblesville and Hamilton County history.

That is a legitimate question.

So she asked McGill, who elaborated more about how the mural was originally going to be the river monster, “since that spot is so close to the river. Connecting the boat launch to Forest Park, that could be fun.” But the monster didn’t embody what the City wanted to say in that spot on the wall and asked for another mural proposal. “Because a river monster is a leviathan, we started playing with the idea of commemorating the Lincoln train that happened a couple of years ago.”

McGill said, “Looking at all of the locomotives that we could that depicts the history of the Nickel Plate Railroad, it was just going to be endless. We were a little concerned that we weren’t going to get all of the details right to make everybody happy. So we decided to do a train that’s been on those tracks, just not one that is specifically connected to the Nickel Plate Rail.”

The City has an ordinance that murals cannot be advertisements.

While the Leviathan mural may “not make those (Facebook) commentators happy,” she said, “We didn’t want this to appear to be a sign advertising actual train rides in the park.”

McGill said, “I am fairly certain that we’ll have other pieces that we’ll connect to the history of the railroad in Noblesville. We just don’t have them solidified yet.”

A dedication and celebration of the mural will be announced by the City of Noblesville soon after the mural is completed.