Fryar, who is listed as a center but can play other positions on the offensive line, chose the Buckeyes over Indiana, Penn State, Purdue and Oregon. He is the No. 2 prospect out of Indiana. 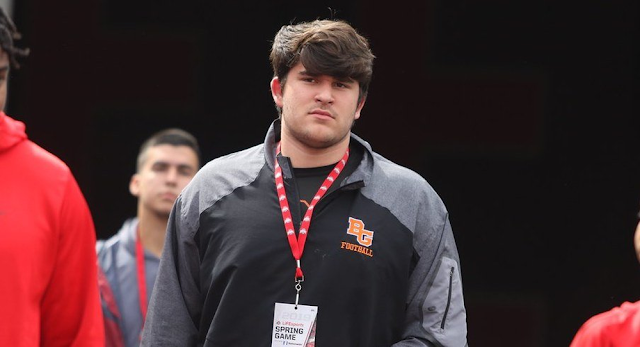 While Fryar had offers from big programs like Alabama, Florida State, Oklahoma and others, Fryar essentially narrowed his recruiting focus to Indiana and Ohio State. His father, Jeff, was a legendary offensive lineman under former head coach Bill Mallory at Indiana, and the opportunity to stay close to home was there for the center.

Ben Davis graduate Dawand Jones, an Indiana All-Star basketball player, is an incoming freshman at Ohio State. Fryar said he talked with Jones on the first day of his official visit.

“It was funny because me and Dawand and three other players played basketball at a park the first night I was there,” Fryar said. “He basically told me if you want a great education, want to work your butt off and have a chance to play in the NFL, Ohio State is where you want to be.”

While there are plenty of football-related reasons to pick Ohio State, Fryar said he was also looking beyond his playing career. He plans to get into communications with an eye on broadcasting.

“Education wise, there are so many connections for broadcasting with Ohio State,” Fryar said. “If you look at ESPN or NFL Network, there are a lot of Ohio State graduates there. And in football, I feel like they are going to push me to the maximum.”

The atmosphere he felt at Ohio State's spring game in April juxtaposed with the intimate and genuine feeling he had during Ohio State's Buckeye Bash & Barbecue on June 21 provided a place where he felt home away from home though. Fryar also made a visit to Ohio State spring practice.

The Indiana center becomes the No. 19 commitment of Ohio State's 2020 class and the sixth offensive line commitment. He is one of four offensive line commits that are rated outside of the top-300 and will likely need to redshirt a year. While he is classified as a center, he can play guard or tackle in Columbus.