Beech Grove, IN. (April 25, 2019) IBG — All last-ditch efforts to save the Hoosier State, an Amtrak passenger rail line that comes through Lafayette on the way to and from Indianapolis and Chicago, couldn’t find a sympathetic vote in the Indiana General Assembly or in Indiana’s next two-year budget.

The $34 billion budget approved late Wednesday night, just before lawmakers ended the 2019 session, cut $3 million a year set aside of the Hoosier State in previous budgets.

“I’m very disappointed,” said Sen. Ron Alting, a Lafayette Republican who said he worked in the closing weeks of the session with Reps. Sheila Klinker, D-Lafayette, Chris Campbell, D-West Lafayette, and Sharon Negele, R-Attica, to try to find room in the budget for the Hoosier State.

“I thought it was a small amount of money in a $34 billion budget, quite honestly,” Alting said. “But the Hoosier State wasn’t in (Gov. Eric Holcomb’s) budget, and it wasn’t in the House version of the budget. So that was hard to overcome, at the end of the day. … We gave it a 100 percent effort.” 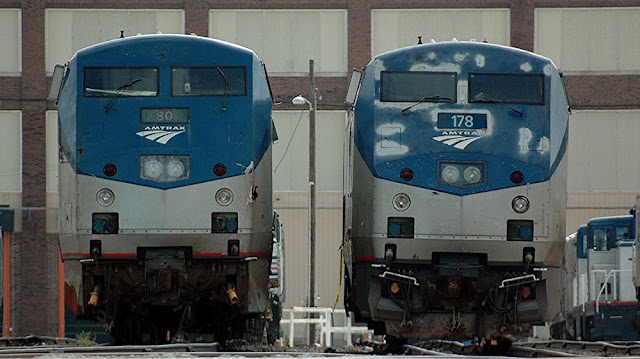 Trains sit at the Beech Grove facility where they receive maintenance for the Hoosier State Line from Indianapolis to Chicago.

On Thursday, Marc Magliari, an Amtrak spokesman, confirmed that the Hoosier State won’t run beyond June 30, which is when Indiana’s current state budget ends.

Amtrak already had been preparing for that possibility.

In March, Amtrak announced it had found a way to trim 15 minutes from the five-hour run from Indianapolis to Chicago – a move seen as a way to win support in the General Assembly. But by early in April, Amtrak stopped selling tickets for the Hoosier State beyond June 30 and contacted more than 500 passengers who had booked trips between July 1 to Sept. 30 to go through options for trips to and from Chicago.

Among the options: Take the Cardinal, a long-distance line that runs from Indianapolis to Chicago on the three days the four-day-a-week Hoosier State does not run.

“We’re open to any continued discussions with the state and the communities,” Magliari said.

“With no funding in the next biennium, the state does not have a budget mechanism to continue funding the service beyond June 30,” Manning said. “If the service were to continue beyond that date, it would need to be without state funding.”


Rail advocates, in Greater Lafayette and in the state, said they already were thinking about other ways to keep the train rolling or to find an alternative.

“Oddly, there’s more funding for bringing a train back than for preserving one, which is totally backward,” said Arvid Olson, head of Greater Lafayette Commerce’s transportation committee. “Smart heads are working toward that right now.”

Olson was part of a community push to save the 196-mile Hoosier State service in 2015. At that time, the state wasn’t excited about picking up the tab when federal funding disappeared for Amtrak routes shorter than 750 miles. Communities along the route – including Lafayette, West Lafayette, Tippecanoe County, Crawfordsville and Rensselaer – agreed to subsidize roughly $500,000 of the service if INDOT would take on a $3 million share each year. The agreement at that time said the deal was predicated on better service, amenities, on-time performance and ticket sales.

Olson said the local effort was careful not to beat up Holcomb, “because he was making a good point.”

“If this, according to Gov. Holcomb, isn’t working, which is a valid thing to say, what will it take to make passenger rail work here?” Olson said.

Olson said that conversation would need to include the possibility for additional stops, which would make passenger rail service more attractive between Lafayette and Chicago. He said there might be possibilities to lure private operators. He pointed to what Richard Branson – owner of Virgin Atlantic Airways, Virgin Hotels, and Virgin Galactic – is attempting to do with Virgin Trains in Florida.

Steve Coxhead, president of the Indiana Passenger Rail Alliance, said he didn’t hold out hope past the next two months for the Hoosier State. His group had lobbied the legislature, including an 11th-hour rally in Beech Grove on Wednesday afternoon, to save the line.

“Most likely, it’s going away, but for how long it will be gone is an interesting question,” Coxhead said. “I think the battle is far from over, though. We know there are other ways, and we’ll be looking at them. … If nothing else, the state opens a new budget cycle in two years. We have to be prepared to go the distance, if it goes that far.”