Beech Grove, Indiana (June 7, 2019) IBG — The significance of the Lick Creek Baptist Church and Cemetery can be seen near the Churchman Avenue entrance to Sarah T. Bolton Park in Beech Grove.

A sign commemorating the early pioneers who were buried there was dedicated Saturday at a special ceremony hosted by the Beech Grove Historical Society and the Samuel Bryan Chapter of the National Society of the Daughters of the American Revolution.


“There is a lot more history in this little spot than people realize,” stated chapter vice-regent Patti Moy. “This assures us that their memories will live long after we are gone.” 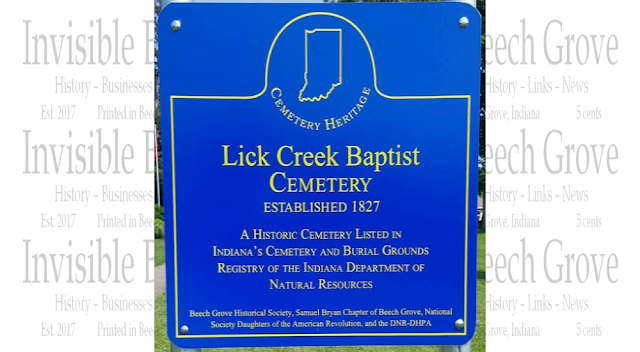 Moy launched her DAR New Horizon Project and will continue to find more information about the deceased there, including a War of 1812 soldier and five Civil War soldiers. She said that it may take one to two years to compile much of her research and to share it completely with Beech Grove residents.


The cemetery was founded in 1827 and covered over when the land was made into a park. When the church broke up, its members formed Zion Church 150 years ago. Pastor Dr. Phillip James and member Pamela Baird represented the church and its nearly 200-year heritage.

“Hopefully, people will now know there was a cemetery here,” said Dick Templin of the Beech Grove Historical Society.

The Samuel Bryan Chapter formally stated: “This marker is placed in grateful recognition of the significance of this site to our community. May it help to keep alive an appreciation of our own heritage. We pay tribute to all the men and women who lie here that served our country, raised our children, and provided a foundation for our current generations.”

The formal sign dedication also featured the presentation of the colors and a 21-gun salute by the Beech Grove American Legion and police and fire departments. Several representatives of the state DAR were special guests of the local DAR chapter.