Schlicher is stationed at Fort Hood, Texas, where he serves as a geospatial intelligence imagery analyst in support of ground combat troops. He has served for 18 months and hopes to make military service a career. During his visit, Schlicher said, “I miss Beech Grove, the small town, the friendliness.” 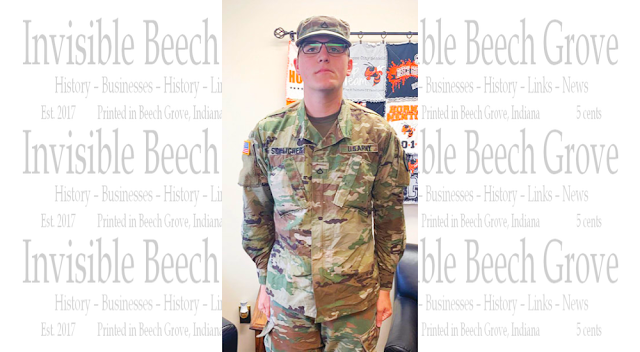 He acknowledged being raised by his grandmother Janice Schlicher as his biggest cheerleader and encourager. He was active at BGHS in the marching band and on the swim team, competing in the 100-yard breaststroke and 200 medley relay.

He praised many helpful and caring teachers at BGHS for making an impact.

Donna Hall encouraged him at the Hornet Enrichment Academy.

“She helped me graduate; I wouldn’t be where I am today without her help,” the former Hornet said. Schlicher also acknowledged swim coach Oskar Vuskalns for “really motivating me to bet better and be a better person.”