Beech Grove, Indiana (May 26, 2019) IBG — There are days when a classmate in the hallways at Beech Grove (Ind.) will ask Josh Fryar if he plans to play college football. Those kids know Fryar as the friendly face on top of the 6-5, 315-pound frame.

“They ask if I’m going to Marian or somewhere local,” Fryar said.

Nothing against Marian, which has built on NAIA powerhouse under coach Mark Henninger on the strength of local talent. Fryar’s older brother, Jacob Fryar, is a sophomore tight end at Marian.

But what those classmates do not often see is the line of coaches waiting in the main office at Beech Grove to see Fryar, a junior, go through a workout. One day this month, assistants from Ohio State, Oklahoma, Penn State, Wisconsin and Vanderbilt were there the same day.

“It’s crazy how you walk through the door and see those coaches,” Fryar said. “I thought I’d be going to a Division II or Division III school instead of a huge Division I school.” 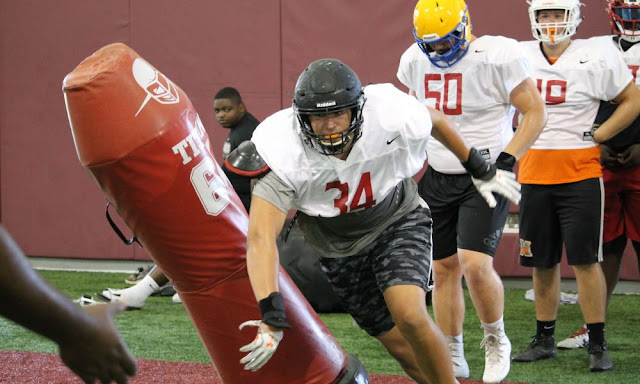 Fryar is literally and figuratively one of the biggest recruits in the state. The multi-sport standout will make the first of his official visits next week to Oregon, where he has a scholarship offer. Fryar has other official visits set for Penn State (June 14-16) and Ohio State (June 21-23), two more schools that have offered. He has plans to narrow his list down to eight by July 4 and then make his decision during the middle or end of his senior season.

“I’m taking it real slow,” Fryar said. “This is the first time and probably only time I’m going to do this.”

The first program to offer Fryar was Indiana State, which was a significant to the family. When the late Bill Mallory was hired at Indiana in 1984, one of his first recruits was Jeff Fryar — Josh’s father — out of Lawrence North. Indiana State’s coach is Curt Mallory, Bill’s son.

I can’t describe what that was like,” Josh said. “Even though it’s a (FCS) school, you have a scholarship offer to play college football. It was humbling because it was coach Mallory and my dad obviously knew him really well. They wanted to be the first one to offer me because my dad was the first one to get recruited by Bill Mallory.”

Fryar came to Beech Grove from Roncalli, where as a freshman he saw action in two plays in the Rebels’ Class 4A state championship win over NorthWood in 2016. “Most nervous I’ve been in my life,” Fryar said. Jeff Fryar had been the offensive line coach at Roncalli for longtime coach Bruce Scifres, who retired after the 2016 season.

“I wanted to try something new at Beech Grove and I absolutely love it here,” Josh said. “I came in blind and didn’t really know anyone. But I love the people, love the teachers, the administration. They are so friendly and awesome to be around.”


College football coaches love Fryar’s athleticism and versatility. He is ranked as the No. 5 center in the country on the 247Sports national composite, but can also play guard or tackle. Coaches also like that he is a multi-sport athlete, playing on Beech Grove’s basketball sectional title team last season as a junior and is currently competing in the discus and shot put for the Hornets’ track team.

For Fryar, who was a standout wrestler from first through eighth grade, there was never a doubt he would continue with basketball and track. He plans to play all three sports again as a senior.

“You are never going to get a chance to play high school sports again,” he said. “Indiana basketball is Indiana basketball. In track, I like throwing the shot and disc. It keeps me active. I don’t want to be that guy who just plays football and lifts weights and doesn’t have anything outside of that to do. I want to expand my athleticism and show college coaches, ‘Hey, I can do this, too.’”

And while he is a star in football, Fryar said it was beneficial to play a supporting role on the basketball team. Beech Grove won its first sectional since 2008 in an emotional season that saw former coach Matt English die after a long battle with brain cancer and former assistant Mike Renfro take the reins.

“My sophomore year I was kind of pushing (former coach Matt English) that I could play varsity,” Fryar said. “But he had a plan for me. He wanted me to be a better basketball player and I trusted him. Sitting on the bench and cheering my teammates on made me have the perspective of, ‘You can change the outcome of a game even if you aren’t playing.’ It was awesome. That was the most fun I ever had in a basketball season. You can actually see the tradition coach English built here and we just want to keep it going.”

Fryar will have his college decision made by the time his senior basketball season begins. Coaches from Oregon and Ohio State were in again Tuesday to watch him work out. Fryar, who plans on majoring in communications, will get his first look at the Oregon campus when he arrives in Eugene on Monday.

“Distance doesn’t really matter to me,” he said. “The relationship with the offensive line coach and strength coach is really important because I’m going to have to click with them. And mainly, you have to talk to the players. They will tell you straight up how it is. I’m just looking forward to taking my officials, talking to the players and seeing what it’s all about.”